How do you use your “earth station”? – St. Thomas E-Learning And Research
Paleofuturism

How do you use your “earth station”?

We can instantly choose one of millions of videos to play on-demand with just a couple of taps on a magic piece of glass called a “phone”…and that’s really, really different than the way content was once consumed.

Thirty-five years ago, HOME Magazine ran a story on what they said were called “earth stations.” 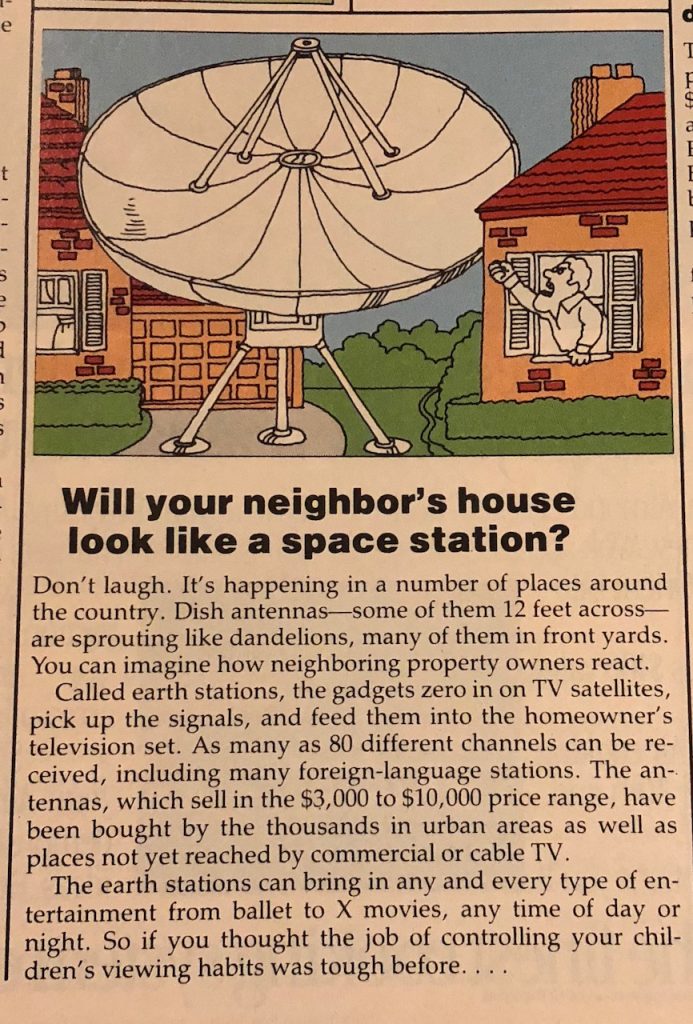 The $3,000 price in 1982 would be more than $7,000 today.  Remember, this was an era when “time-shifting” was impossible unless you were one of the few to own a VCR, and “on-demand” was inconceivable.  Eighty channels has grown by a factor of about one million.  Viewing “many foreign-language stations” is nothing compared to having actual content from peers and producers sent to you across the planet.

And the notion of “controlling” viewing habits (of children, or of ourselves)?  Nobody could have imagined…

So at one time, people were willing to spend months’ worth of wages to fill their yard with a giant metal dish… to choose from among 80 channels.  Was that for education?  Or for entertainment?  Now that we have the world at our fingertips (literally), do we show the same level of dedication to learning from others across the globe?  Entertainment has changed in 35 years… but not that much.  We still go to movie theaters.  We still go to live theaters and concerts.  We still sit in our living rooms in front of large screens (now larger and flatter and clearer, but still remarkably like the televisions of the 1980s) viewing movies, one-hour dramas, sports and sit-coms.  Did swiping through Facebook (or Instagram or Tinder) change the nature of how we engage with the world?

This post was written by Eric M. Larson, an Instructional Systems Consultant in the St. Thomas E-Learning and Research (STELAR) Center at the University of St. Thomas in St. Paul, Minn. Eager to reminisce about classic computing? Stop down at STELAR in the lower level of the OSF Library, where you’ll find yourself among friends, or email us at stelar@stthomas.edu.

“Just double-click on the seagull…”

Paleofuturism: Everything old is new again