Paleofuturism: Everything old is new again

Ever since I was a really little kid, I’ve loved to dig out old books and magazines with “predictions of the future” and enjoy how quaintly incorrect they were. In recent years I learned that I wasn’t alone in this quirky pastime, which has been dubbed “paleofuturism.”  Part of my interest lies in the belief that “failed futurism” can give us a valuable opportunity:  Like the proverbial (and discredited) frog in slowly-heated water who doesn’t realize he’s boiling, we’re now living in the future once dreamed of, yet we might not see the opportunities we have because we’ve become slowly acclimated to them.

I hope this will become a regular series here, which is a fairly easy challenge to give myself because there’s so much of the past for me to draw from.  For starters, I reexamined an article from 30 years ago (June, 1988) by Fred D’Ignazio in COMPUTE’s Gazette magazine — a magazine for Commodore users.  (As an aside, I still haven’t gotten the flying car that I was promised by the year 2000, but I assumed I’d grow up to do 8-bit Commodore support and don’t spend much time astonished that we now walk around with magic pieces of glass in our pockets that can connect us instantly to any piece of content anywhere on the planet.)

D’ignazio joked about terminology that we now find commonplace: 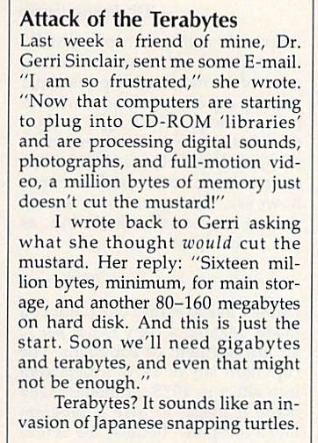 Today, a terabyte is still a lot… but you can walk into any retailer and buy a 4TB hard drive for the cost of a nice dinner out.  When I read this reference in 1988, I couldn’t fathom that much data.  Now I have it in my basement.

Later, after lamenting that computers make us more busy rather than less (still true!), D’ignazio offered a whimsical dream of a program: 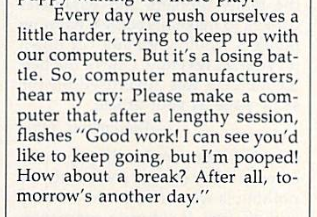 It took a couple dozen years, but computer manufacturers did hear D’ignazio’s cry.   The notion of wasting precious computing power on a timer was absurd in 1988, when “multitasking” was a technical term for a computer switching between two programs (and that was an impressive feat).  Those of us who wanted a break from our technology (though… really, who would want to take a break from something so fun?) had one alternative:

Today, there are dozens of programs and phone apps — remember that magic piece of glass in your pocket? — that do exactly what D’ignazio hoped.

Whether we use them? That’s a different question…

This post was written by Eric M. Larson, an Instructional Systems Consultant in the St. Thomas E-Learning and Research (STELAR) Center at the University of St. Thomas in St. Paul, Minn. Eager to reminisce about classic computing? Stop down at STELAR in the lower level of the OSF Library, where you’ll find yourself among friends, or email us at stelar@stthomas.edu.

“Just double-click on the seagull…”

How do you use your “earth station”?