Tales from the Archives — Speed Skating at St. Thomas

One of my favorite Winter Olympic sports is speed skating.  I love watching the athletes sprint around the oval on their narrow blades where one false move will find them spinning out on the ice.   But it wasn’t until I was exploring the University Archives collection the other day that I realized how many St. Thomas alums were noted speed skaters. 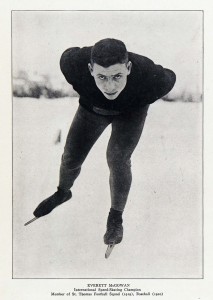 A multitalented athlete, Everett McGowan lettered in football and baseball as a student at St. Thomas from 1919 to 1920. But he is best known for his speed-skating prowess. McGowan won the national and international speed skating championships in 1920 as an amateur. His success continued during a professional career in which he beat veteran speed skaters such as Norval Baptie in the 1921 Northwest Championship. 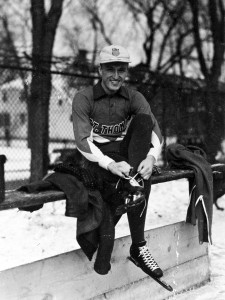 Leo Freisinger attended the College of St. Thomas from 1937 – 1938.  Prior to enrolling at St. Thomas he won a bronze medal in the 500m race at the 1936 Winter Olympic games.  He continued to compete in national and international speed skating events after that, wearing the St. Thomas colors in the 1938 International Speed Skating Championships in Oslo, Norway. 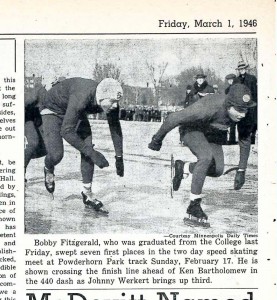 Bobby Fitzgerald won several indoor, outdoor and North American speed skating championships as a teenager.  But, his skating career was interrupted by World War II and a injury he suffered while in the Army.  After returning to civilian life,  he finished his college degree (graduating from the College of St. Thomas in 1946) and resumed his speed skating career.  He later won the silver medal in 500m the 1948 Winter Olympics and was a member of the 1952 Olympic speed skating team.

Study Night in the Library, May 6!