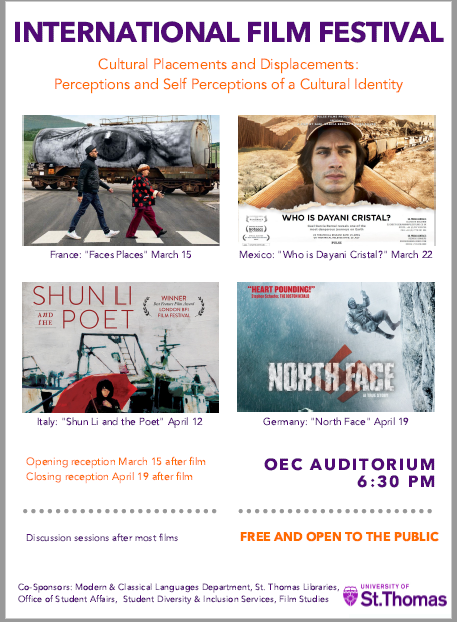 All are cordially invited to attend a first of its kind on the St. Thomas campus International Film Festival 2018.  This collaborative effort represents five departments (Modern & Classical Languages, St.Thomas Libraries, Office of Student Affairs, Student Diversity & Inclusion Services, and Film Studies) who have chosen the theme Cultural Placements and Displacements:  Perceptions and Self Perceptions of a Cultural Identity.

The opening film, “Faces Places” was nominated for an Oscar this year in the Best Documentary – Feature category.

Discussion sessions will be held after most films.

The St. Thomas International Film Festival 2018 is free and open to all.  The entire university community and the general public are welcome and encouraged to attend.  Please plan to join us!

The O’Shaughnessy Educational Center (OEC) Auditorium is on the University of St. Thomas campus at 2115 Summit Avenue in St. Paul, Minnesota. The nearest cross street is Cleveland and Portland.

New computers at the Keffer Library!