Academic Fraud – Exposes the Flaws of the Peer Review Process

We tell the students who we teach about using library resources that they should limit their research to peer reviewed journals for many topics. Particularly in the sciences. Many of our databases, Academic Search Premier, Expanded Academic and our mega-search tool, Summon, limiting to peer reviewed scholarly resources is a choice.  The Chronicle of Higher Education is reporting on an incident that took place in 2001. GlaxoSmithKline paid a ghost writer to write a paper that was accepted for publication in the peer review,  Journal of the American Academy of Child and Adolescent Psychiatry, Vol. 40, (7) 2001 762-772. GlaxoSmithKline admitted its guilt and has paid 3 BILLION dollars, yes BILLION with a B. According to the Chronicle article, Paxil made over 11 billion dollars ust between 1993 and 2007.

The purported 22 authors were not from Podunk U (apologies to Podunk). These were people from Brown (who will not comment); University of Pittsburgh; UCLA;  New York University; Dalhousie University;  University of Pennsylvania; State University of New York at Stony Brook; Center for Health Research, Portland, OR; University of Texas; Washington University, St. Louis (my alma mater, tsk tsk); Grace-1WK Hospital, Halifax;  University of Toronto; Oregon Health Sciences University; New York State Psychiatric Institute; Children’s Hospital of Philadelphia. The list reads like the who’s who in major research universities. And nothing is happening to the researchers who have gone on to have prestigious positions at major universities, holding named positions, editors of journals and publishing in large quantities. Nothing is happening to this ‘prestigious’ journal NOR is the article being retracted. Did you know there is a Medical Subject Heading for Retracted articles? AND something allegedly did happen to the children who took this drug when it is not recommended for people under 18. Suicide.  That’s  the real tragedy here.

In 2008 the book Side Effects: A Prosecutor, a Whistleblower, and a Bestselling Antidepressant on Trial by Allison Bass was published. There are two copies in CLICnet. It documents this event.

For me, having been an academic medical librarian for 26 years prior to going to general academic libraries this admission does more than just put this article and these people into doubt. It puts the process into doubt.  If they thought they could get away with this, and they did for 11 years, it must be rampant in the scientific community. Oh, we’ll just let the drug maker write it up for us! We’ll get the credit, it will support our advancement and tenure documents, we’ll get more government grants.  It makes me feel that a Wikipedia article gets more scrutiny than a journal article in a prestigious journal. OK, kids, just go to Wikipedia. Watch out for the article by Keller, et. al.  (That’s more warning than any article that cites that 2001 article gives.)

Do you want access to the Chronicle of Higher Education from your mobile communication device? Want to skip the library login process for gaining access? The Chronicle of Higher Education now provides direct and mobile service to its content (UST Libraries is covering the extra fee for this) in addition to campuswide access through the library website.

Any current UST faculty, staff or student who has or creates a free Chronicle account with their “@stthomas.edu” address now will be able to do the following:

All that is required is a free Chronicle account, which can be created by going to Chronicle.com and clicking on the “create” link at the top, right-hand side of the page.

From the Chronicle of Higher Education.  (by Jennifer Howard)

“Although more and more scholars are interested in trying out new technologies as a way to share or publish their research, the traditional cultures of their disciplines and the high regard accorded to peer review still tend to have the strongest influence on them, according to a substantial new report on scholarly communication from the Center for Studies in Higher Education at the University of California at Berkeley.

The report, “Assessing the Future Landscape of Scholarly Communication: An Exploration of Faculty Values and Needs in Seven Disciplines,” focuses in depth on the fields of archaeology, astrophysics, biology, economics, history, music, and political science. Produced with the help of a grant from the Andrew W. Mellon Foundation, the report draws conclusions from interviews conducted over several years with 160 scholars from 45 “mostly elite” research institutions.” 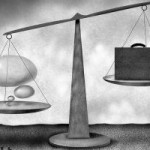 Carter A. Daniel writes in the Chronicle that reports written 50 years ago by the Ford and Carnegie foundations had a profound and negative effect on business school education in America, leading most to over-emphasize academic theory and credentials at the expense of a thorough grounding in actual business practice.

Daniel thinks that the schools should have resisted the criticisms, and suggests that much of the research doesn’t impact business: ” The number of academic journals in business tripled over the next 25 years, and the number of business books published each year more than quadrupled. Their relevance and usefulness can’t, of course, be quantitatively proved or disproved, but it’s commonplace to hear businesspeople scoff that academic research never has any influence on what they actually do in their companies.”  I’m wondering, however, how much of what one learns in any educational program is explicitly or consciously remembered and applied, versus how much just becomes ingrained in one’s intellect and skill sets and is used unconsciously.

What do you think?