Lisa Bu: How books can open your mind

Summertime and the reading is easy!

Hey, UST-ers! Graduation is over, the Class of 2013 is on its way to becoming productive members of the “real world” and summer has arrived in Minnesota. Okay, so the last one might be a bit of a stretch, but even if it’s not beach-y outside, you can still get plenty of R-n-R at the library this summer.

If you’re taking a little break during Summer I, don’t forget we have lots of stuff to keep you entertained: leisure books are arriving regularly. We also have Kindle ebook readers for you to check out!

If you’re sticking around and taking classes during summer, we’ve got stuff for you, too! Our reference services will still be available for all of your research questions! This summer, we will so please come and chat with us.

Just as a reminder: The O’SF library will be open seven days a week during both summer sessions.  Here are UST library hours. Coffee Bene will be back in September.  We miss them too!

Congratulations to the University of St. Thomas Class of 2013!

Whether you finished in four years, are celebrating as a super-senior, or transferred in from another school, the O’SF library extends a big UST Congrats to all the graduating seniors this weekend! We truly hope the O’SF library was a positive part of your time here at St. Thomas, and we’re sure gonna miss seeing your smiling faces (studying is fun, right?) in the library! 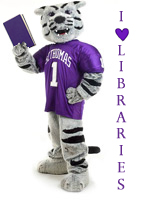 If you are graduating, you don’t have to entirely say goodbye to the library, though! We’ve got great resources for graduates! Check out our library services for Alumni.

You can also keep up with the latest in O’SF Library happenings by following us on Twitter, and liking us on Facebook. (We know you’re gonna be nostalgic for the all-nighters you pulled here. It’s okay to admit it. We get it.)

If you’re not graduating yet, don’t fret! We have plenty of awesome stuff in store for the summer and next school year, too. Keep in touch, come say hello, and stake out your prime study space for next fall! Remember, we’ll be closed this Sunday and Monday for graduation/Memorial weekend, but we’ll be back up and running on Tuesday, May 28 for Summer hours.

Thank you, seniors, for helping make our work at the library special and important. After all, the library is here to support YOU! Good luck to all the graduates as you embark on your next adventure. And remember, you’ve always got a friend in the O’SF library!

Here is a new memoir of a librarian who does some great bashing of professional stereotypes.  John Hanagarne is a librarian in Utah.  Here is a link for the full article at New Yorker. 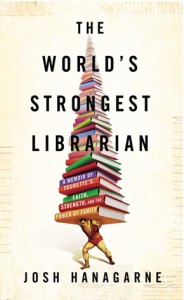 May Day Images from ARTstor 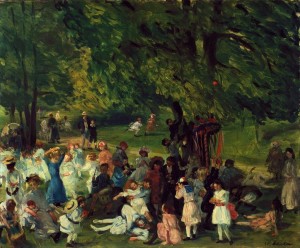 May Day has many different meanings for people all over the world.  It started as a spring festival to celebrate the warmer weather.  Now May Day is identified with labor rights.  Here are a few images from Artstor that reflect the festival nature of the day. 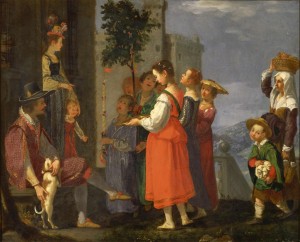 Library wedding proposal: one for the books:

Chicago ad exec Jason Methner wrote a marriage proposal into a children’s book — and tricked his girlfriend into finding it.

Courtesy of: The Star

A 31-year-old Chicago advertising executive has written a marriage proposal that is one for the books, portraying himself as a tortoise and his girlfriend as the hare (or, in this case, bunny).

Jason Methner is the creative mind behind the illustrated account of his relationship with his girlfriend, Molly Lipsitz.

He had the book, titled A Hare-y Tale, illustrated by friend Yoni Limor and placed the bound volume among the “new arrivals” in a Chicago library for his 27-year-old girlfriend to find.

The book refers to some of the activities they have done as a couple in their 4½-year relationship.

In it, Methner is portrayed as the tortoise and Lipsitz as “Bunny” — because she has slept with a stuffed rabbit named Bunny since childhood.

In one sketch, Bunny is shown marching off to university with a bag of her belongings tied to a stick. The book even includes a sketch of their one-year-old dog Hammer.

Like the classic tortoise and hare story, Methner and Lipsitz each take life at a different pace. Methner is laid back, while Lipsitz is an A-type personality, very organized and constantly producing lists. She enjoys healthy food. He loves cheeseburgers.

However, they have plenty in common, including a love of adventure, food and jogging.

They also enjoy good books and libraries. So it was only natural that the marriage proposal should take place in a library.

For this special moment, Methner chose the Harold Washington Library Centre, the main branch of the Chicago public library system.

On March 23, he used “a lie” to trick Lipsitz into finding the 20-page book on a shelf in the branch’s Thomas Hughes Children’s Library.

As Lipsitz began flipping through it, she came to an abrupt stop on page 3: the narrative mentioned Sandy Springs, her home town near Atlanta. Lipsitz grew suspicious. Methner encouraged her to read on.

On the next to last page, the story read: “Although we don’t often run at same pace, do you want to slow down and spend the rest of your life with me?”

And on the last page: “And Bunny said …” This was followed by an empty space for her to say “yes.”

At that point, Methner got down on one knee, popped the question and pulled out a diamond engagement ring.

As in all good fairytales, this book had a happy ending.

She exclaimed, “Yes,” and a professional photographer concealed behind the bookshelves emerged to snap the delightful moment.

“I didn’t cry. That’s not really my style,” Lipsitz told the Star from Chicago. “I was just totally surprised and shocked in a good way. It was an amazingly thoughtful and creative proposal and in an unexpected place.”

The Chicago Public Library posted the photos on Facebook, which helped turn their proposal into a viral event.

“I have known Molly for a few years now, and when Jason thought about this idea he asked me if I could photograph it. There was no way I was going to miss it,” she told the Star in an email. “I think it played out really well.”

Library staff helped her rearrange books so that she could have a clear view of Methner’s picture book.

“This is the first time I photographed a surprise proposal,” she said.

Lipsitz appreciated that Methner had arranged for her to go with a friend to have a manicure that morning, not knowing it was so she would look good in photos showing the ring on her finger.

No wedding date has been announced.

Methner made five more copies of the book so relatives would have the book as a memento.

“Most women have been very flattering to me with compliments about my creativity,” he said. “But a lot of men, especially in my friends’ group, have given me the eye roll … like, thanks for setting the bar so high.”

ARTstor has reached an agreement with Condé Nast to share 25,000 images of cartoons from The New Yorker, highlights from the Condé Nast Archive of Photography, and selections from the Fairchild Photo Service.

The images in these collections will be of great assistance in teaching a myriad of subjects like history, literature, and fashion. The New Yorker’s cartoons are legendary for their incisive wit and for shedding light on the dominant topics of every era, from the Depression to the Internet. The magazine’s cartoonists include renowned figures like, Peter Arno, Roz Chast, Otto Soglow, William Steig, James Thurber, and Gahan Wilson. The Condé Nast Collection, containing images dating back to 1892, represents one of the world’s greatest collections of magazine photography, encompassing fashion, celebrity, and lifestyle photography from publications such as House & Garden, Glamour, Vanity Fair, and Vogue. The Fairchild Photo Service, comprised of more than three million photos gathered over six decades, is the fashion world’s preeminent image gallery.

Condé Nast is home to some of the world’s most celebrated media brands. In the United States, Condé Nast publishes 18 consumer magazines, four business-to-business publications, 27 websites, and more than 50 apps for mobile and tablet devices, all of which define excellence in their categories. The company also owns Fairchild Fashion Media (FFM), whose portfolio of brands serves as the leading source of news and analysis for the global fashion community. Condé Nast has won more National Magazine Awards over the past ten years than all of its competitors combined. For more information, visit condenast.com or follow them on Twitter @CondeNastCorp.

The ARTstor Digital Library provides 1.5 million images in the arts and sciences and a Workspace to search, browse, present, and save images both online and offline for teaching and research purposes. ARTstor is a nonprofit 501(c)3 organization with a mission to further education and scholarship through digital technologies. For more information, visit artstor.org

This infographic came out earlier this month, but I thought it had some interesting statistics on the coexistence of ebooks and print books:

The Harlem Shake is now being done in libraries across the world.  Here is one of the better ones:

Celebrate the Birth of Our Government 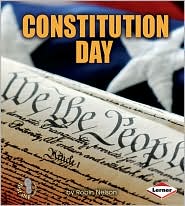 September 17 is Constitution Day! (It’s also known as Citizenship Day.) On this day in 1787, the US Constitution was ratified in Philadelphia, PA. The Constitution is the highest law in the US. It’s the framework for our government, outlining the powers and duties of the legislative, executive and judicial branches. It has been amended 27 times. The first ten amendments are known as the Bill of Rights. But here are some facts you may not know…