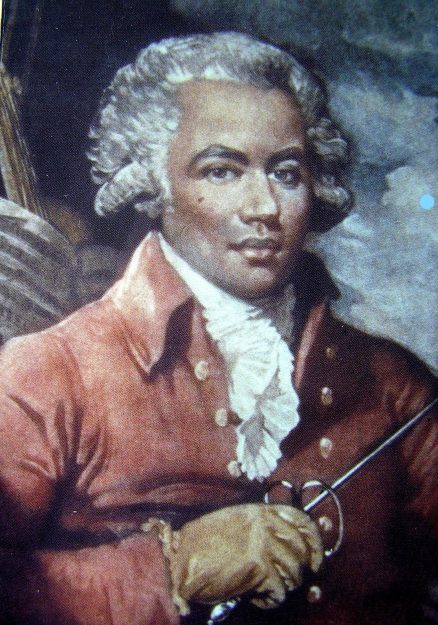 Lost to history for nearly 200 years, Afro-French composer Chevalier de Saint-Georges was a profoundly talented composer, violinist, and fencer. He was born in Guadeloupe in 1745 to a plantation owner and his slave, Nanon. Chevalier was sent to France for his education and by 17 had become such an expert swordsman he bested one of the greatest fencing masters in France. His musical talents were also superior. While he did face discrimination, he was also highly celebrated and widely loved and even performed his own works for Marie-Antoinette.

He heavily influenced Mozart who at one point even directly copied some of Saint-Georges’ complex motifs. During the French Revolution, he became a colonel of a cavalry brigade of men of color, which included the author Alexandre Dumas’ father. After the war and his imprisonment for his aristocratic ties, he was released and returned to his music. For a full account of his extraordinary life story please check out the documentary Le Mozart Noir: Reviving a Legend (ML410 .S145 M6 2003 DVD), which is also available for steaming on Avon, and its soundtrack (M1000 .S25 M6 2003 CD)! Approximately one third of his compositions still exists today. We encourage you to listen to his string quartets (M452 .S25 Q37 2003 CD ), and violin concertos ( M1012 .S145 2001 CD, M1012 .S145 2004 CD, M1012 .V565 1997 CD) which we have in our collection. Please visit us on the first floor of the O’Shaughnessy-Frey Library to the right of the Main Circulation desk.

Comedy, Music, and Improvisation! Noonartsound in the Library, May 7