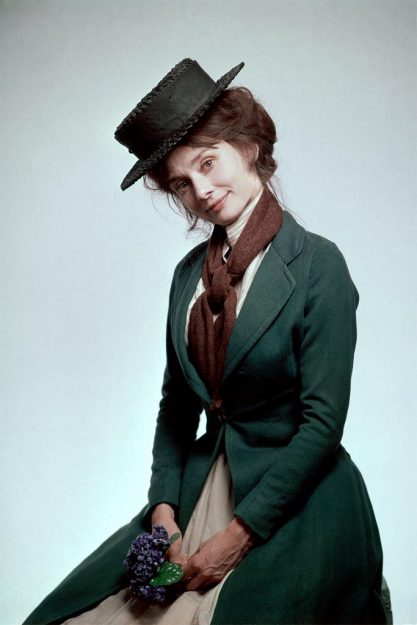 Experience the magic of musicals with the Music and Media Collections! We’re located on the first floor of the O’Shaughnessy-Frey Library to the right of the Main Circulation desk.

If you want a close-up look at the history of musicals in America, check out Broadway Musicals: A Jewish Legacy. This feature-length documentary charts the significant contribution to Broadway by famous Jewish composers like Irving Berlin, Jerome Kern, and the Gershwins. It also features classic performances by Barbara Streisand, Joel Grey, and Nathan Lane of this uniquely American art form.
ML1711.8 .N3 B76 2012 DVD

Go on a thrilling ride with My Fair Lady, Lerner and Loewe’s adaptation of George Bernard Shaw’s original play. The film stars a young Audrey Hepburn as Eliza Doolittle, a penniless flower girl in the dirty streets of London taken in by Professor Higgins for the sake of a linguistic experiment. Don’t miss this Academy Award-winning feature musical!
M1500 L64 M9 2004 DVD

Les Parapluies de Cherbourg (The Umbrellas of Cherbourg) is a remarkable French musical in which every word of dialogue is sung! Catherine Deneuve stars in this stylish film about the life and loves of a young woman working in an umbrella boutique in Normandy. It’s a film full of romance and heart.
PN1997 .P376 2004 DVD

This is only a selection! We have titles such as Stephen Sondheim’s Sweeney Todd with Angela Lansbury, The Music Man, Roger and Hammerstein’s Oklahoma! and many others!

The OSF Library White Board Question