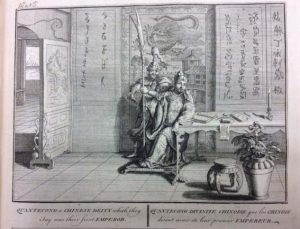 In the early decades of the 18th century, Bernard Picart and Jean Frederic Bernard collaborated on a project which became a “best-seller” of its time.   Picart, a noted engraver, and  Bernard, a Huguenot bookseller and publisher, created a text which captured the ritual and ceremonial life of all the known religions of the world.   The first volume of this monumental nine volume work was published as Ceremonies et Coutumes Religieues de tous les Peuples du Monde in 1723.

The authors’ aim was to present all religions (including those practiced by “idolatrous peoples”) as objectively as possible — highlighting what common between religions more than how the religions differed from one another.  Marriage and funeral customs, for example, are described in detail for nearly every religion.   Picart’s lavish illustrations accompany many of the most important rituals.

This work  was translated into French, German, English and Dutch and published in numerous editions over the next 100 years. The University of St. Thomas Libraries Rare Book collection holds two early versions of this influential title – one written in English and another written in French. 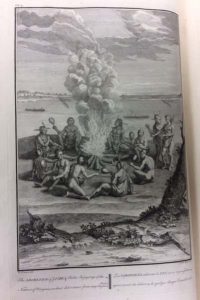 Adoration of Fire by the Natives of Virginia

For more information on the UST Libraries rare books and manuscripts collections see our website.

OSF Library to be open during Saturday’s snowstorm