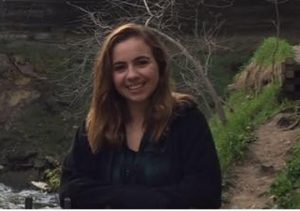 Looking for your fix of creepy cinema as Halloween approaches? Look no further than streaming services offered by the Music & Media Collections! Kanopy Films features nearly 200 horror films ranging from classic to foreign. This film database also has a large collection of science fiction & fantasy films to choose from.  With so many options, every thrill-seeker is sure to find a film to that will excite or fright.

Use the links below to go Kanopy Films to browse the selections or find some of the top picks from the Music & Media Collection to stream for your Halloween movie night:

The Girl on the Train

Commuter Rachel Watson catches daily glimpses of a seemingly perfect couple, Scott and Megan, from the window of her train. One day, Watson witnesses something shocking unfold in the backyard of the strangers’ home. Unable to trust her own memory, Rachel begins her own investigation, while police suspect that she may have crossed a dangerous line.

A film by artist Guillermo del Torro, antique dealer Jesus Gris stumbles across Cronos, a 400-year-old scarab that, when it latches onto him, grants him youth and eternal life — but also a thirst for blood. As Jesus enjoys his newfound vitality, he’s unaware that a dying old man, Dieter de la Guardia, has sent his nephew, Angel, to find the scarab and bring it back to him. But Jesus will not give immortality up easily, even risking the lives of those near to him.

This 1959 classic suspense film tells a spooky, campy tale of five strangers who are offered $10,000 each by an eccentric millionaire to spend the night in a haunted house. As the night develops, it becomes clear that these strangers’ selection was no accident–and a few have some diabolical schemes of their own!

Othello at the Guthrie

Carol Bruess’ blog to the Scroll hits the spot!

Course Reserves "How To" for Faculty