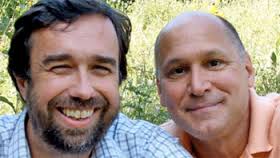 Program features the French Suite in G major by J.S. Bach, another French suite by Gabriel Faure and Maurice Ravel, and Hello Cello by Claude Gagnon. The duo also will premier several new works they have commissioned: Campfire Songs by Michael Karmon, Fantasy by Bryan Johanson, and Frozen Columns by Ron Pear.  The evening’s program is the same one the duo will perform on their November concert tour throughout Minnesota, Wisconsin, and North Dakota.

Schönberg and Kachian, who are educators as well as performers, formed the Arpeggione Duo after meeting at the Guitar Festival of Sollentuna, Sweden, in 2004. Since that time, they have toured annually and have recorded four albums.

Schönberg is a native of Sweden and was accepted to the Royal Music Academy of Stockholm at age 13. He received his doctorate at the University of Hartford, Conn., and is dean of the Lidingo School of Music in Sweden. He performs throughout Europe, Asia and the United States on a cello made by Guarneri filius ca 1715.

Kachian, whose doctorate is from the University of Minnesota, heads the Guitar Studies Program at St. Thomas and in 2011 was inducted into the renowned Sigma Alpha Iota International Music Fraternity. A champion of new music, he has commissioned and premiered more than 40 works for guitar. He has given more than 500 performances in Japan, China, Africa, Cuba, Costa Rica, Peru and throughout Europe and North America.  Kachian is a founding member of the Society for the Affectation of Baroque Music and also plays the blues harmonica.

The duo’s name reflects the musicians’ blend of guitar and cello. Invented in 1823 by Viennese guitar maker Johann Stauffer, the arpeggione has six strings and frets like a guitar, but it is similar in size to a cello and played with a bow. Only one major work was written for the instrument, the Sonata in A Minor for Arpeggione and Piano by Franz Schubert.

The Duo Arpeggione’s 10th anniversary concert is free and open to the public —  refreshments will be provided.   For more information please call Julie Kimlinger at (651) 962-5014.

Othello at the Guthrie