Did you know that the first Homecoming at St. Thomas happened on May 21, 1918?  Instead of a parade, a football game and a dance, the day included lunch, a baseball game against Macalester plus dinner and a reception.

Over the past 96 years, several Homecoming traditions have been lost or changed.  For example, during the 1950s, student groups erected displays on the lower quad to show their school spirit.  Creative slogans devised by the groups were one of the main criteria the judges used in evaluating the displays.  The best displays won big prizes of $15, $10 and $5 to be used for future activities of the organizations. 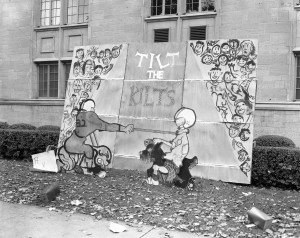 Another bygone tradition is the  bonfire that was traditionally held the night before the football game.  From the 1920s through the early 1960s, college freshman under the supervision of the Tiger Club would spend up to two weeks gathering branches and other materials to add to the pile.   During the bonfire, the students would throw their freshman beanies to the blaze as a sign that they had become “True Tommies.”  Fire codes, unfortunately, prevent this event from happening today. 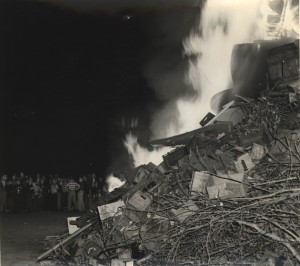 To see more photographs from Homecomings of the past, search the online University Archives Photograph Collection.

Library to host Concerts in November and December

Tales from the Archives – The Tommy/Tommie Mascot