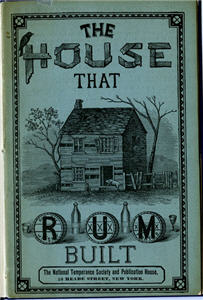 Rev Dwight Spencer (1827-1910) wrote the poem that is one of the most interesting of temperance tracts, The House That Rum Built. This booklet is visually unusual and … poetical. Quite rare, the pamphlet clearly stands apart from ordinary temperance “propaganda.” While perhaps not exactly artistic, the poem is certainly energetic, brimming with crusader zeal. Here is a link to this fascinating pamphlet.
This is the man, all tattered and torn,
Who goes to the gin-mill every morn
And owes his fall to taking a horn
And lives in the house that rum built.

On the page opposite each stanza is an evocative illustration — the overall effect frequently striking. Here, within considerable negative space, an isolated figure turns away from the verses.

The illustrations are by a Canadian-born Methodist minister, Edward Carswell (born 1832) himself a temperance crusader and author (also poet!) and illustrator of similar tracts, including The Temperance Alphabet (1871), John Swig (1871), The Indians and Whisky (1870’s) and a number of broadsides. In the 1870’s the National Temperance Society and Publication House seems to have been a hotbed for this kind of popular pamphleteering. A sample of other Carswell graphics can be viewed at the excellent Brown University Library Center for Digital Initiatives “Alcohol, Temperance and Prohibition” collection. Search his name at http://dl.lib.brown.edu/temperance

The Rev. Spencer is an intriguing man. Although I have not found a published biography, Spencer was from New England and New York, but in 1880 became superintendent of missions for the Rocky Mountain District of the American Baptist Home Mission Society. Much of his missionary life seems to have been “out west.” He was very active in Utah, establishing the Ogden Baptist Church and First Baptist Church of Salt Lake City, among others, in the heart of Mormon country. He later returned to the East and was a district secretary of the Baptist Home Missionary Society.
More than in temperance work, Spencer’s prominence in the research I have been able to conduct appears to derive from the “dark side” of a reformer’s zeal: intolerance, prejudice, and xenophobia. In Immigrants, Baptists, and the Protestant Mind in America by Lawrence B. Davis (1973), he is held up as succumbing to the anti-immigrant and indeed anti-Catholic fervor of the time, one that displaced the rosier ambition of many Baptist and other Protestant leaders that foreigners coming to America would be fertile ground for evangelization.

Where are you going with books?