An Award for Flipper

Craig Eliason is an Associate Professor in the Department of Art History. His research focuses on the history of printing types, and particularly on the strategies and vocabularies used to classify their designs. He is currently teaching a course on the history of typography and type design. His scholarly research on type design goes hand-in-hand with his efforts as a practicing type designer.

On this past Thanksgiving day, the Morisawa Corporation announced the winners of its 2014 Type Design Competition. This Osaka-based font and printing company sponsors a periodic juried competition, inviting entries of new typefaces from type designers all over the globe. There are categories for kanji fonts (used for written Japanese) and Latin fonts (our familiar abc’s). The judges were among the most eminent names in type design. The main competition, the Morisawa award, was given to type designs showing “creativity and excellence in design.”

I was pleased to learn that two fonts from a typeface family I have created, called Flipper, were awarded Honorable Mention by the judges. My work was thus one of six designs distinguished from the hundreds of entries for a prize in the Morisawa Award Latin category (and the only selected entry from a U.S. designer). A trophy is being sent from Japan, and there was even a cash prize (which sounded like a truly extravagant sum until I looked up the yen/dollar exchange rate)! 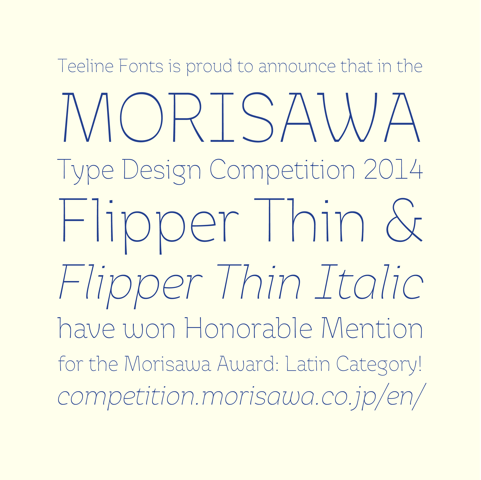 I started designing typefaces in 2008, when I realized that my research agenda–studying the history of type design–would benefit from the immersive experience of undertaking such design myself. The design skills I have developed have, without question, sharpened my ability to assess design decisions made in historical typefaces. My skills in this specialized realm of design developed slowly, since much of the process was self-guided and remained a part-time project; but I steadily improved. My second design project was a conceptual typeface that I called “ambicase.” Each of its letters combined the traditional upper- and lowercase forms of that letter. Unlike my inaugural project, this one was good enough to release to the world, so I established a foundry, Teeline Fonts, and started selling licenses for the fonts. Ambicase Modern, and its ultra-bold brother Ambicase Fatface which came along a year later, are odd enough that their versatility (and thus their market potential) is limited, but they did earn a feature article in the typography journal Codex. 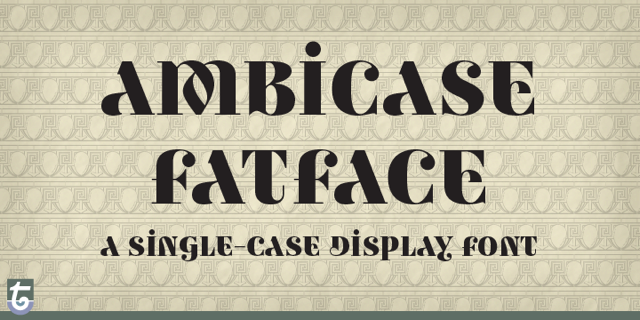 The project that won the Morisawa distinction, Flipper, started in September 2013, right here on the St. Thomas campus. Walking through the quad, my eye was caught by the cornerstone in the Murray-Herrick building. It reads “1960,” not in the pseudo-medieval inscribed letters that are so prominent on campus, but rather in strikingly modern glyphs. What most interested me was the pattern of thick and thin parts of the bowls (the rounded parts of the figures): while in most glyphs we are used to seeing the thickest parts of the bowls on the sides and the thinnest parts on the top and bottom, these figures had it the other way around–“flipped”! Could I build a whole typeface around this idea? I imported the photo of the zero into my font editor software and traced it, called it an “o,” and started building an alphabet. 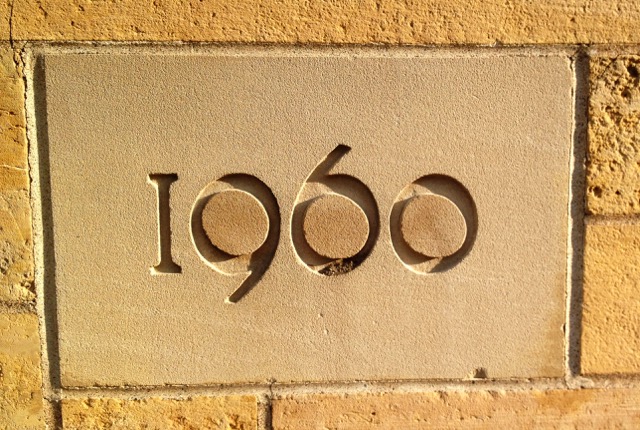 Though that “o” has been almost untouched since, I have discovered that this unconventional pattern of thicks and thins (often called “reverse contrast”) poses difficulties if it is to be massaged into a workable type. I came up with a system of occasional serifs and flared stroke endings which combined to normalize the alphabet into a readable and attractive design. Along the way I’ve solicited feedback from peers in the type world at every opportunity: by signing up for a “type-crit session” at an Amsterdam type conference, for example, or getting peer review from English type pros at a pub during my study-abroad trip to London last J-term. In the meantime, I have expanded the weight range, too. This resulted in, at one end, a super-bold font that emphasizes the cartoonish energy of the reversed contrast. At the other extreme, the thinnest weight reduces the contrast pattern to a very subtle effect, producing a friendly and airy impression. It was these thinnest weights (upright and italic) that were singled out by the Morisawa judges for the honorable mention. 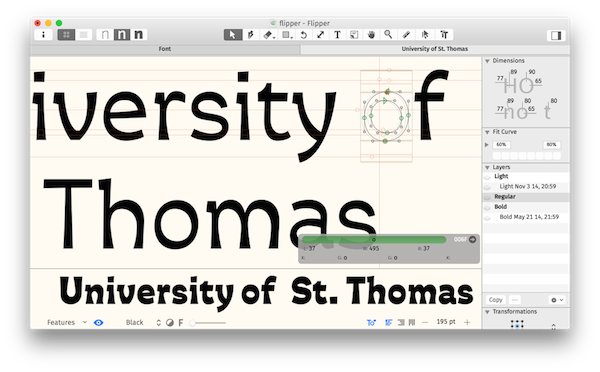 As a professor, most of my professional engagement takes on more traditional forms: searching in archives, delivering presentations, and publishing original research. My work as a designer is nonetheless valuable as a complement to my work as an art- and design historian. I am grateful for opportunities like the Morisawa competition to validate my type designs. I will take this award as encouragement to complete Flipper and to keep including creative work as a key way for me to understand the world of type design.