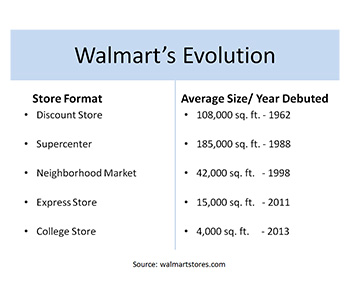 Walmart’s foray into smaller, urban format locations is in some cases END_OF_DOCUMENT_TOKEN_TO_BE_REPLACED

Here is a recent article by Randyl Drummer posted by the CoStar Group. It shows how Target along with Walmart is adapting to opening smaller locations in urban areas

The latest growth strategy at Wal-Mart stores is to get bigger by getting smaller. After building the world’s largest retail platform by opening superstores in every major U.S. market, Wal-Mart is doubling down on a strategy of opening new stores that are a fraction of the chain’s traditional size, targeting densly populated urban areas where demographics increasingly show more people prefer to work and live.

The Bentonville, AR-based retailer is aggressively expanding its Neighborhood Market stores, which average 38,000 to 40,000 square feet — a fraction the size of Wal-Mart’s traditional 180,000-square-foot “Supercenters.”

Bill Simons, president and CEO of Wal-Mart, said the company plans to open more than 200 more Neighborhood Market stores in the U.S. over the next 18 months, bringing the total to more than 500.

“We continue to roll out this format aggressively throughout the country, opening more sites in the second quarter than in any other quarter in our history,” Simon said. “In fact, we opened 12 stores in just one day this (past) quarter.”

Moreover, the retailer has signaled it may green light an even smaller format called Walmart Express, with stores that range in size from 10,000 square feet to 12,000 square feet. Wal-Mart has built 20 Express stores in a pilot phase that has “performed very, very well for us,” Simon said, adding that the retailers plans to share more details about its plans for the smaller format at its Oct. 15 meeting for the investment community.

Both concepts compete directly against a rising number of grocery stores, drug stores and dollar discount stores that have added groceries to their offerings to reach shoppers looking for value and convenience.

The giant retailer’s smaller formats are part of a multichannel strategy to stock products purchased at its bricks-and-mortar stores as well as quickly deliver products ordered online.

In part to support that rapid product delivery strategy, Wal-Mart this week announced plans to open two new online fulfillment centers, an 800,000-square-foot facility in Fort Worth, TX, and a 1 million-square-foot center scheduled to open in early 2014 in Bethlehem, PA, that will be its largest ever.

“Increasingly, access is becoming more important to customers. And we believe we have an opportunity today through multiple formats to take our brand closer to the customers,” Simon told investors at the recent Goldman Sachs Global Retail Conference.

While not a new concept – Wal-Mart has been opening typical grocery store sized markets since 1998 – Neighborhood Markets is now one of the fastest-growing formats in retail, with 60% growth and mid-single-digit comparable sales over the last couple of years, Simon said.

Target: Also Testing Smaller Format, But Proceeding Cautiously
Fellow discount retailer Target has been more deliberate in the national rollout of its smaller-format CityTarget stores. Although only two have opened so far in 2013, for a total of seven, the company sees immense promise in the new smaller format.

A report by ChainLinks Retail Advisors highlights some of the major trends currently impacting national retail real estate. The 2013 U.S. National Retail Report notes that retail expansion is being shaped by two trends in particular: the impact of e-commerce and bifurcation due to a weakening middle class consumer segment. The impact of e-commerce on bricks-and-mortar retailers will continue to grow. The report predicts that this trend will lead to a long-term change in shopping center tenant mixes, with more dining and entertainment and fewer hard goods retailers.

Stagnant middle class growth is the reason for the second major trend, which is of increasing bifurcation in the retail market. Mid-price point stores will see limited growth while luxury and discount retailers will continue to expand. On the discount side, national dollar store chains are growing aggressively and are making their mark in the net lease investment market. Dollar stores are occupying more and more freestanding locations, and offer an alternative to investors struggling to land a net lease drug store or fast food tenant. Dollar General and Family Dollar each plan to open at least 500 new stores in 2013. The report predicts that dollar stores will account for at least 15 million square feet of occupancy growth nationwide this year. 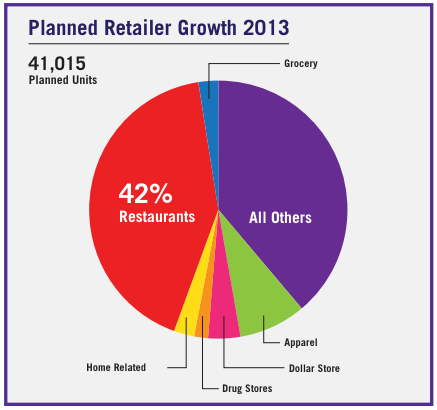 The report examines retail categories which are most likely to expand and contract in the coming years. Restaurants account for nearly half of planned retail growth for the year. Grocery retailers will also expand, and competition for that market is particularly  END_OF_DOCUMENT_TOKEN_TO_BE_REPLACED