Remodeling Activity At Record Levels In The Twin Cities 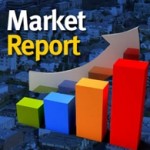 One of the side effects of the continuing shortage of homes for sale and median sale prices rising faster than the cost of living is that remodeling contractors have become very busy. This is a trend that has been developing over the last couple of years. Homeowners are realizing that if they sell their home it will be very difficult to find a new home. As a result, many are choosing to stay where they are and remodel their current home. The data shows that the average length of home ownership in the United States has been steadily increasing. In 2007, the average homeowner stayed in their home for about seven years and in 2008 it had increased to nine years. By 2016 this number had increased to ten years. According to the Home Buyer and Seller Generational Trends Report – 2017 by the National Association of REALTORS Research Department prospective buyers now expect to live in their homes for a median of 12 years, while18 percent say that they are never moving.

As result many remodeling contractors are booked ahead well into next year. Several of the local remodeling contractors I have spoken with recently have indicated that business is very good. According to the Joint Center for Housing Studies at Harvard University remodeling activity in U S major metro areas have reached a peak level of activity and the Twin Cities is no exception. Remodeling activity in the Twin Cities is expected to increase at 7.8% in the coming 12 months. In comparison the average growth projection for other U S major metro areas is 6.8%. As more homeowners elect to remain in their existing homes for longer periods that means that these homes will not be available for sale, further contributing to the shortage of homes available for sale. I expect this increasing length of ownership trend will continue for the foreseeable future contributing to the ongoing shortage of homes available for sale. 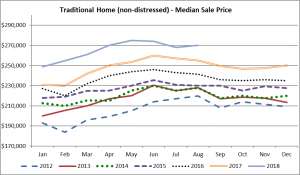 The shortage of homes for sale continues to impact the local housing market. Median sale prices were flat between July and August at $268,000, however, the Twin Cities housing market continues to show a year over year gain in sale prices, marking an 6.3% percent annual increase in August 2018. The annual rate of increase has remained on pace with increases that were recorded earlier this year. The number of homes sold in August 2018 was 6,605 an increase of 5.4% compared to last month and a decrease of .2% compared to August 2017

On the supply side at the end of August there was a 2.5 months supply of homes available for sale. In comparison in a normal, balanced market there is about a 6 month supply. In August 2018 there were 12.193 homes available for sale, 8.2% less than the 13,280 that were available in August 2017. A relatively high annual growth rate in median sale prices and historically low supply will continue to dominate the market for the foreseeable future.

For more information, visit the Shenehon Center’s complete report for August 2018 at http://www.stthomas.edu/business/centers/shenehon/research/. The report is also available for free via email from Tousley at hwtousley1@stthomas.edu

The Housing Market – Have we hit the bottom in Minneapolis / St Paul?