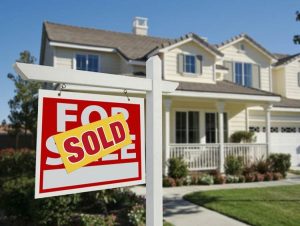 homeowners since the low point in median home sale prices that occurred in February 2012. Since then median home sale prices in the Twin Cities have increased by $82,300, a gain of 43.8%. In April the median home sale price was $266,500 eclipsing the prerecession high water mark of $238,000 observed in July 2007. As has been noted before this rapid rate of increase has been fueled by the historically low availability of homes for sale coupled with improving economic conditions and relatively low mortgage rates. Another positive development is that in February 2012, 61.5% of all the sales in the metro area were distressed sales compared to the 3.3% that was observed this April. The percentage of distressed sales has since returned to pre-crash levels at less than 5%. The wealth creation effect of continued increases in home values will ripple throughout the economy as homeowners will be able use this newly created equity for investments or purchases. 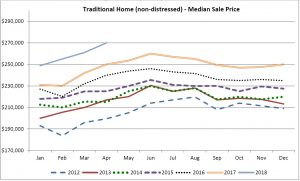 How long will this trend continue?

In the near term a rapid rise in interest/mortgage rates and/or an increase in inflation would begin to make homes in all price ranges less affordable for many potential homebuyers. A decrease in the number of qualified buyers would put a damper on the demand for homes, reducing the upward pressure on home prices. In the short term it appears that neither one of those scenarios is likely to occur. Until that happens expect to see the supply of homes for sale remain very low and annual price increases in the 6% to 8% range. As in the past the current shortage of homes for sale has been most acute in lower to moderately priced homes (See the table below)

Median sale prices increased 3.3% between March and April ($258,000 to $266,500 respectively). The Twin Cities housing market continues to a show strong year over year gains in sale prices, marking an 8.8% percent annual increase in April 2018. While this is great news for sellers, a continuation of this rate of increase is going to create affordability issues for some potential buyers since this rate of increase is much higher than the growth rate of area income. On the supply side in April 2018 there were only 9,100 homes available for sale, 24% less than the 11,964 that were available in April 2017. A high annual growth rate in median sale prices and historically low supply will continue to dominate the market.

The number of homes sold in April 2018 was 4,664 an increase of 15.5% compared to last month and a decrease of 4.6% compared to April 2017. At the end of April there was a 1.8 months supply of homes available for sale, In comparison in a normal, balanced market there is a 6-month supply. Distressed sales accounted for only 3.3% the recorded home sales in April, similar to percentages observed before the housing market crash in 2007. New listings in April were 7,325, a decrease from the 7,890 recorded in April 2017. The decrease in new listings indicates that the supply of home of homes for sale situation will continue to tight in the near future.

For more information, visit the Shenehon Center’s complete report for April 2018 at http://www.stthomas.edu/business/centers/shenehon/research/. The report is also available for free via email at hwtousley1@stthomas.edu.