St. Thomas Real Estate Analysis: Twin Cities Remains One of the Most Affordable Housing Markets in the Nation

The 13-county Twin Cities region compares favorably to other metro areas thanks to wages and strong housing-market fundamentals.

The Twin Cities remains near the top of the list of affordable housing markets in the United States, according to an analysis conducted by the Shenehon Center for Real Estate at the University of St. Thomas’ Opus College of Business. Each month the center tracks the median price for three types of sales in the 13-county Twin Cities region: nondistressed or traditional; foreclosures; and short sales (when a home is sold for less than the outstanding mortgage balance). In addition, it looks for trends in the market and creates a monthly composite index score by tracking nine data elements for those three types of sales. Herb Tousley, director of real estate programs at the university, credits “continuing strong housing-market fundamentals and above-average wage growth thus far in 2015” for keeping the Twin Cities near the top of affordable-housing lists “According to Forbes, household income growth in the Twin Cities in 2014 was 1.9 percent. Based on our improving local economy and low unemployment rate, we are expecting household income to grow 2 percent to 2.5 percent in 2015,” Tousley said. “That means that household incomes and median home sale prices are increasing at nearly the same rate so in terms of real dollars home prices are keeping up with inflation. 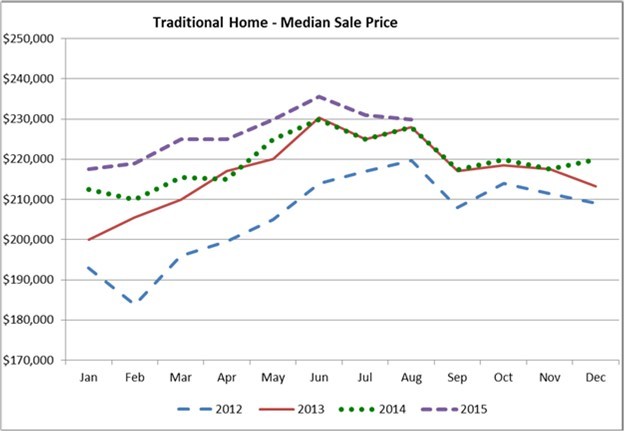 “This is not the case in many major metro areas around the country. In May 2015 the average apartment rent in the Twin Cities market had increased to just over $1,200. Home ownership in the Twin Cities remains an affordable option for many since a household that is earning the median annual household income can afford to purchase a home selling at the median sale price in our market.” Here are five examples of single-family-home affordability from around the country (details are available on the Shenehon Center website):

The full report and additional charts for August can be found at http://www.stthomas.edu/business/centers/shenehon/research/default.html.