With more young people choosing cities over suburbs, Target Corporation announced early this year its new small-scale concept, TargetExpress, which is going to open in Dinkytown (Minneapolis, MN). Despites the challenging previous year marked by a difficult Canadian expansion and data breach, Target Corp. kept its ambitious plans by now responding to the recent American housing trend through this TargetExpress concept. Even though its competitor Walmart already adopted this small-format store concept with “Walmart Express” about 3 years ago, Target still has some rooms of opportunity in this progressing housing trend in the U.S. Regarding this matter, the Time magazine even recently stated “The New American Dream Is Living in a City, Not Owning a House in the Suburbs”. 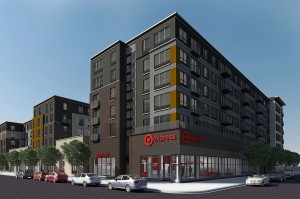 A rendering of a TargetExpress store, a smaller version of sprawling suburban Target stores that is geared for city dwellers (Source: The New York Times)

Unlike its typical stores, CityTarget (80,000 to 125,000 square feet) and SuperTarget (about 174,000 square feet), this new concept is a 20,000-square-foot store. Its strategic location of Dinkytown, precisely in the newly-built Marshall apartment building, will help better target young people such as the University of Minnesota students. With the 2014-2015 academic year starting in early September and TargetExpress debuting July 23, college students living nearby or planning to do so will get a chance to buy items such as home decor or consumer electronics not only in a more convenient way, but also before school starts.

Housing Has Bounced Back, but Capitol Hill Holds the Key to a Sustained Recovery