A Look at Property Taxes Nationwide

With income tax returns completed and filed (hopefully on time), the next big tax payment many people across the country will make will be property taxes. According to the findings of a new residential property tax study from the Tax Policy Center, in 60% of U.S. counties the reported property tax burdens average between $500 and $1,500 a year. But that might only cover a month’s worth of taxes on a home in the most highly taxed counties. 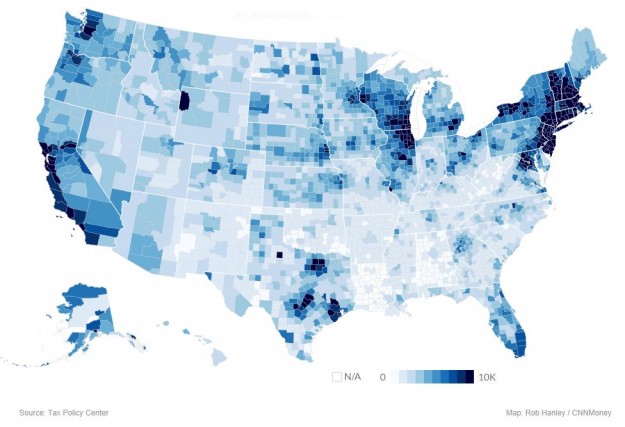 Some of the highest average property tax burdens can be found in the New York. Westchester County, N.Y. ($9,647 a year) and Nassau County, N.Y., ($9,080) (both New York City suburbs) had the highest average residential property tax burdens. Many other counties in New York also have high property taxes, a result of duplicative local government units (one county alone had 941 separate governments, including towns and villages as well as police, fire, and school districts) and an education funding system that relies predominantly on property taxes.

On the other end of the spectrum, 24 counties nationwide had annual property taxes below $250 a year. Nearly all of those were in Alabama or Louisiana, where local governments tend to rely more on sales tax than property tax to generate revenue. In some locations, property taxes are modest in terms of the dollar amount but are actually relatively high when considered as a percent of home value. Much of Illinois, New York, and New Jersey fall into this category, as well as parts of Nebraska, Wisconsin, and Texas. Their property taxes on average well exceed 3% of home values, whereas in most counties in the nation the average property tax is at or below the 1% mark. 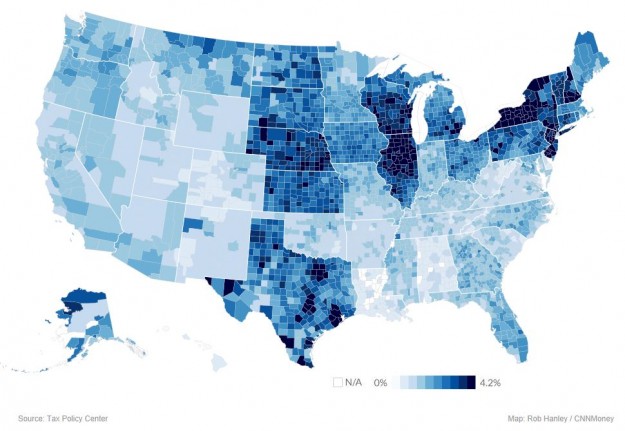 In Minnesota, residential property taxes tend to be at or near the national average. Homeowners in Twin Cities metro area counties tend to pay a higher dollar amount than most other counties nationwide, but tax levels are about average when considered as a share of home prices (about 1% to 2%). Of course, tax burdens can vary widely by municipality and from property to property depending on how the tax levy is set and how property values are assessed. If after reading this you think you might be overpaying, check out this Wall Street Journal article on how to lower your property taxes.