Jones Lang LaSalle recently released its 2014 Skyline Review, a report on CBD office markets in major cities across the country. The review offers an inside look at occupancy in urban office centers across the country. As the “Skyline” term indicates, the review focuses on Trophy and Class A buildings in office districts known for high-quality assets, market-leading rents and high demand from institutional investors.

The Minneapolis Skyline building set includes 22 buildings and currently has an overall vacancy of 11%, down from 12% in last year’s report. However, absorption has been slow despite increases in office-using employment. This is mainly attributable to tenants “right-sizing” their space to use less square feet per employee. 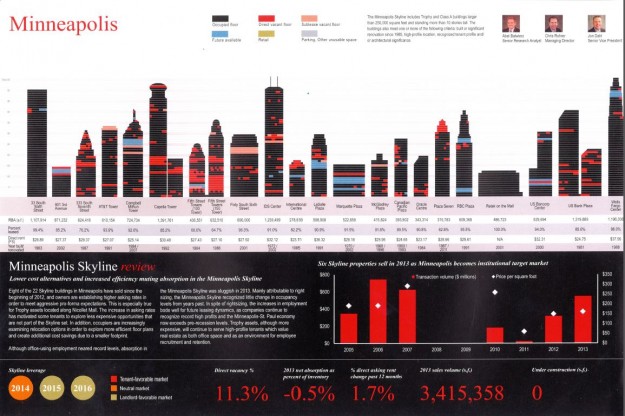 Six Minneapolis Skyline buildings sold in 2013, as the market saw increased interest from institutional investors. Total sales volume was approximately $600 million on transactions for 3.4 million square feet of space. Skyline buildings sold for an average of just above $150 per square foot, which was higher 2012 levels but still below historical peaks above $250 psf in 2007 and 2010. One of the buildings sold was the IDS Center, which was acquired by joint venture of Beacon Investment Properties LLC and two Israeli companies for $253 million. 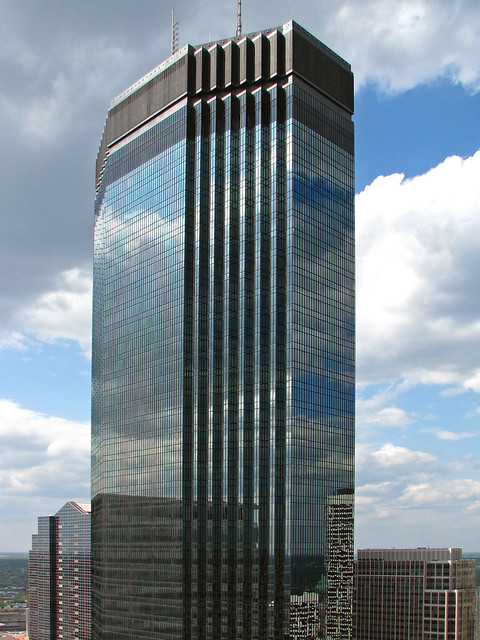 The IDS Center, Minnesota’s tallest building, was one of six Skyline buildlings in Minneapolis that was sold in 2013. Inland American Real Estate Trust sold it for $253 million after buying it for $277 million in 2006.

Capella Tower currently has vacancy of 15% on 1.4 million square feet, but that will change when the Star Tribune moves in next year.

Occupancy and rents continue to vary widely among the Skyline buildings. As in 2013, the lowest vacancy can be found at 33 South Sixth Street, with occupancy at 99.4% on 1.1 million s.f. of rentable area. On the other end of the spectrum is Fight Street Towers, which continues to struggle with vacancy of over 35% on about 1 million square feet. Minneapolis’ three tallest buildings continue to perform well, although vacancy has increased slightly at the IDS Center at 9%, up from 5% last year. Wells Fargo Center maintains 98% occupancy and the highest direct rents of the Skyline at $37.56 per square foot.  Capella Tower has had higher vacancy than its two tall peers, but that will be helped somewhat by the recent news that the Star Tribune will soon call the building home.

Is the Twin Cities Housing Market Really Beginning to Change?