Last week, Twin Cities real estate professionals gathered at the University of St. Thomas for the third annual Real Estate Outlook event. The program included a series of panels featuring leading experts in local real estate market segments, each offering their views on the current state of the market and their expectations for the coming year. The event was co-sponsored by Shenehon Center for Real Estate at the University of St. Thomas Opus College of Business and Integra Realty Resources. Here is a recap of some of the major themes presented:

The keynote presentation was made by State Economist Laura Kalambokidis, who discussed the current state of the economy locally and nationally. Minnesota has generally fared better than the nation in recovering from the economic downturn. Employment in the state has now climbed back to pre-recession levels. Unemployment in Minnesota is at 4.6%, well below the national rate of 7%. Employment growth has been strongest in the health services, business services, retail, and hospitality industries, all of which have grown between 2.5 and 4% year over year. Government and manufacturing were the worst performing job sectors over the previous year, each declining by about 2%. Despite a slight drag on the economy from policy uncertainty related to the federal budgetary process, continued modest growth is expected locally and nationally over the next two years. 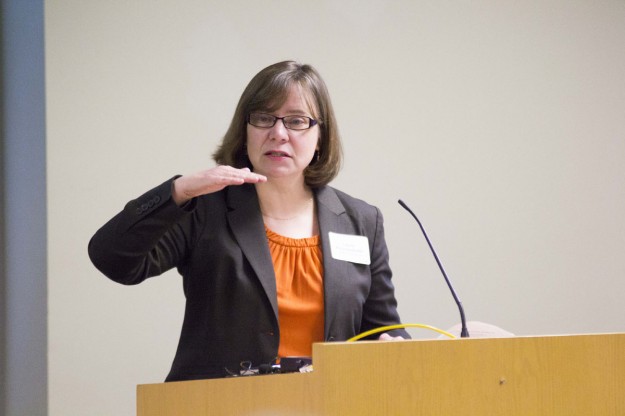 Mike Salmen of Transwetern started off the office panel with a report on 2013, which was a decent year for Twin Cities office real estate. Absorption was modest at approximately 200,000 sf. Vacancy has slowly been decreasing thanks to the job growth and low unemployment noted by Ms. Kalambokidis. While Class A Space is performing well, Class B and C space and certain sub-markets are still seeing high vacancy.

Steve Chirhart of TaTonka Real Estate Advisors agreed, noting that the St. Paul and East suburban sub-markets were the weakest office markets in the region, although vacancy has declined from a peak of over 25%. Mark Kolsrud of Colliers stated that the St. Paul CBD had the least amount of investor interest of the regional submarkets, and that this was due to a lack of interest from lenders.

On the other side of the metro, the 394, Southwestern, and Minneapolis CBD submarkets are all performing very well. Mr. Salmen believes the I-394 corridor is currently the hottest office market in the Twin Citeis, with rates pushing into the mid-teens and low vacancy. Vacancies are also low in the Southwest submarket, despite the addition of 3 million sf of space since 2007. An anomaly in the West Metro is the Northwest submarket, which has among the highest vacancies at 24%. Mr. Kolsrud pointed out a 150 basis point swing in cap rates from the 394 area to Northwest submarkets. Like St. Paul and Eastern suburban, Northwest is unlikely to attract interest from institutional investors, although the panelists believed a local developer could find a way to make a deal work.

Lastly, the Minneapolis CBD remains the largest submarket and currently has vacancy at 15%. A big concern for office real estate downtown is the impact of the Wells Fargo build-to-suit deal with Ryan Cos. for new office space in Downtown East; the panelists speculated that this move could pull 1 million space of occupancy out of the downtown core as Wells Fargo consolidates employess in the new buildings. Another concern is the increasing obsolescence of older buildings, where mechanical systems and floorplans don’t support the employee density and layouts now desired by office tenants. But despite these concerns, downtown continues to see strong investor interest, as institutional investors from the coasts seek out the comparatively higher cap rates available in Class A properties in Minneapolis. Additionally, institutional investors are increasingly interested in “non-traditional” investemnets, such as office conversions in historic warehouse buildings in the North Loop area. 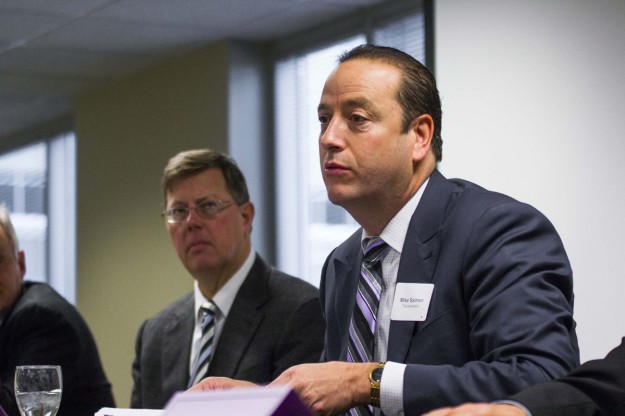 The office market panelists ended with a discussion of a macro trend that will have a large impact the office market going forward, which is coporate users taking less space per employee. The average space used per employee is expected to decline from over 220 sf to 150 sf by 2015. Among ten large renewals over the last 18 months, almost all took less space than they had before. Thus despite employment growth, the outlook for office absorpbtion is flat.

The retail market panel featured a lively discussion with Jim McComb, John Johannson of Colliers, and Skip Melin of Cushman Wakefield. In the Twin Cities, 2013 saw declines in vacancy and somewhat flat absorption of roughly 900,000 sf. However, Mr. Johannson noted that good space is mostly full, and gave the example of 16 formerly vacant spaces over 12,000 sf in the Southdale area, of which 13 have leased in the last 16 months. Mr. McComb noted that there isn’t much vacancy in smaller neighborhood spaces either. He pointed out that changes in the economy and demographcis are creating opportunities in retail markets.

One of the most significant retail developments currently underway is an outlet center in Eagan. Mr. Melin noted that the center will have 400,000 sf of space for 19 tenants, anchored by Saks Off 5th. Mr. Johannson then described another large 450,000 sf outlet development currently in the planning stages, this one also in Eagan. These two projects are all the more interesting because they are just about the only large multi-tenant retail developments currently in the works in the Twin Cities. Each are banking partly on capturing tourist trade from the nearby Mall of America but also taking advantage of a submarket in Eagan that is currently under-retailed.

The panelists noted that grocery-anchored retail centers continue to be strong performers and very attractive to institutional buyers.The Twin Cities grocery market has been in flux over the last few years as newer entrants to the market like Wal-Mart, Target, Trader Joes, and Whole Foods have taken away market share from traditional leaders Cub and Rainbow. While Cub continues to hold onto about 30% market share locally, Rainbow has declined significantly and some panelists questioned whether the company would survive another five years in the Twin cities market. However, Mr. Johansson argued that retail is a very efficient market wherein companies are rewarded for providing what consumers want. Retailers who fail to adapt to changing preferences will soon lose out, creating an opportunity for new concepts to come in.

The panel closed with a discussion of trends that will impact retailers over the coming years, such as a shift from regional malls to neighborhood retail districts. Mr. McComb stated that sales are lagging at regional malls, where store mixes have not kept up with shifting customer bases. Key shopping demographics are increasingly spending their dollars at neighborhood centers with more interesting stores that are less oriented towards kids. Another big factor will be the impact of new internet tax fairness legislation, which will require that online retailers to collect sales tax even when they have no physical presence in the state. While the panelists noted that this would help to level the competitive playing field for bricks and mortar stores, that’s not to say that internet retail sales won’t continue to grow. However, Mr. McComb noted that 7 of the top 10 online retailers have traditional bricks and mortar stores, leading him to wonder about the unseen impact of bricks and mortar stores in driving online transactions.

In the multifamily market, the question most people seem to be asking is “how long can it last?” Vacancy remains low and rents are higher than they’ve ever been. Steve Schachtman of Steven Scott Management noted that his buildings are now billing back for nearly all utilities, which they hadn’t ever done before. However, older properties are being increasingly pressured by new construction, forcing many owners to make significant renovations in order to stay competitive.  Quality management also becomes very important to retaining tenants and staying competitive.

Herb Tousley of Exeter Realty noted that their recent apartment project C&E Lofts was fully leased within six months with few concessions. The few concessions that were given were motivated mainly by the goal of getting leases in place to allow a refinance on the project. Exeter is now moving on to a historic renovation and apartment conversion project at the St. Paul post office. Unlike the office market, the downtown St. Paul apartment market is performing well with low vacancy and rents comparable to downtown Minneapolis.

Abe Appert with CBRE stated the believes the multifamily market has never been better. That includes the lending environment, which continues to see strong demand and favorable terms, although LTV restrictions remain tighter than they were in years past. Mr. Appert stated that the multifamily boom has been based in part upon shifting preferences for homeownership. However, the local market has absorbed much of the demand resulting from that shift and most growth going forward will rely on job growth. According to Appert, multifamily sales volume was above $500 million in 2013, up from about $425 million in 2012. Investor interest in Twin Cities apartments remains strong, and currently there is more demand than supply available.

The Outlook event ended with a panel on the industrial market featuring Arvid Povilaitis of Meritex and Greg Miller of Interstate Partners. The panelists discussed how some of the new trends in distribution space have yet to reach the Twin Cities due to its position in the supply chain. For example, the new mega distribution centers with 32 foot clear ceilings favored by companies like Amazon are not in high demand here yet. However, Mr. Miller explained that 28 ft clear space for production and smaller-scale distribution tenants of around 25,000 sf is in high demand. A recent spec project of his saw 180,000 sf of demand for 80,000 sf of space. Much of that was from tenants looking to relocate from older, less efficient space. Mr. Povilaitis noted that most industrial vacancy is in buildings which are becoming functionally obsolete, typically with clearances under 20 feet and outdated office space.

The panelists felt the performance of the industrial market was reflective of the state of the overall economy, since so many different business sectors are represented. Like the overall economy, growth in the industrial market is steady but not gangbusters. Mr. Miller noted he has seen lease deals being made for longer terms recently, with a typical deal term at 7-10 years compared to for 3-4 years in the recent past. That bodes well as it signals that business are optimistic about the state of the economy and willing to make longer-term investments.

The panelists did express concern about a warehousing tax recently passed by the Minnesota state legislature. While the details have yet to be determined, such a tax could add significant expense to distributors. Mr. Miller noted a wine distributor who could face an additional 21% in operating costs should the tax take effect. This has led some companies to consider relocating to Wisconsin. However, the tax may yet be repealed and the legislature is facing considerable pressure to do so.

Day 3 – How is your new year’s resolution going?