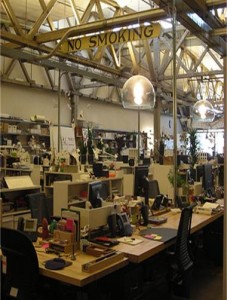 The article below is reposted from CoStar. It was written earlier this year but I believe that it is still very relevant. There is a major change underway in how office space users are looking at their future office space needs and the utilization of their esisting office space.  This is a long term trend that is going to have a significant impact on office space owners, users, and investors.      – Herb Tousley, Director of Real Estate Programs, University of St. Thomas

Perhaps just as the inevitable disappearance of music, video and books stores should have been foreseen at the onset of a digitized connected world, so too should the commercial real estate industry start taking a hard look at changes occurring in the office market.Tenants are downsizing their offices, particularly larger public firms, as they increasingly adopt policies for sharing non-dedicated offices and implement technology to support their employees’ ability to work anywhere and anytime, according to Norm G. Miller, PhD, a professor at the University of San Diego, Burnham-Moores, Center for Real Estate, in a webinar he presented to CoStar subscribers last week.Miller said he put together the webinar to examine what would happen if office tenants used 20% less of the nation’s current office space, which has a total valuation of $1.25 trillion. That decrease in demand would represent $250 billion in excess office capacity. Although the current situation is not that dire, Miller said the trend is real, and he presented how it is currently playing out and the long-term implications for office building owners and investors.Following the webinar, CoStar News interviewed Dr. Miller for a more in-depth discussion of the topic and surveyed a wide sample of webinar participants to share their firsthand account of the ongoing trend and its implications.
According to Miller, four major trends are impacting the office market:
* Move to more standardized work space.
* Non-dedicated office space (sharing), along with more on-site amenities.
* Growing acceptance, even encouragement of telecommuting and working in third places, and
* More collaborative work spaces and functional project teams.
“Historically, under the old corporate hierarchy, everyone had their own assigned office or work desk and we saw utilization rates of 50% or so,” Miller said. “Firms that have moved to sharing space are seeing much more efficient utilization rates of 80% to 95%, sometimes using conference space seats to handle unexpected overflow. Some also have arrangements with temporary office space vendors like Liquid Space, Regus, HQ, Instant Space, as well as supporting employees working from home or third places.”“The average amount of leased space (per employee) has been shrinking,” he said. “As of mid-2012 the average was 185 square feet per worker, well below the average space assumption in most office-demand models, and well below figures 10 years ago.”There have definitely been changes in office demand, agreed Tim Wang, director and head of investment research for investor Clarion Partners in New York. “Ten years ago, 250 square feet per office employee was the gold standard in office real estate. Today, that average has dropped to approximately 195 square feet. While some office tenants are hesitating to commit to large leases primarily due to economic uncertainties, the long-term trend is clearly shifting towards efficient space usage.” Brian J. Parthum, who tracks employment and economic trends for Southeast Michigan Council of Governments (SEMCOG) in Detroit, said his group is a case in point.