Banks Cutting Back on Mortgage Business as Rates Rise 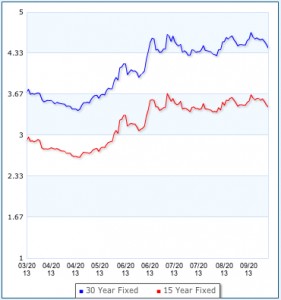 U.S. mortgage interest rates have climbed since May
(Source: Bankrate)

Applications for U.S. home loans plunged last week as mortgage rates matched their high of the year, according to the Mortgage Bankers Association (MBA). Refinancing activity has also fallen to its lowest level in over four years. The MBA seasonally adjusted index of mortgage application activity (which includes both purchases and refinances) fell 13.5 percent last week, the worst performance for the index since 2008.

As a result, many banks are cutting their mortgage divisions and closing units that had been created to service customers during the recent refinancing boom. JPMorgan laid off more than 2,000 employees in early August, about half of them in its originations division. Bank of America, Wells Fargo, and Citigroup have also made major staff cuts in their mortgage lines of business in the last quarter.

Wells Fargo, which currently makes about one out of every four home loans in the United States, recently announced layoffs of 1,800 staff, including about 350 Twin Cities-based employees. The company employees about 20,000 in the state of Minnesota, 8,000 of which are in its mortgage operation. Company officials said the recent layoffs would not impact Wells Fargo’s interest in the proposed Ryan Cos. development in Minneapolis’ Downtown East; Wells Fargo has been linked as the potential anchor tenant for the project’s 1.1 million s.f. of office space.

CCIM Institute: Deal Flow On The Rise Across the Country