A press release from the Minnesota Department of Employment and Economic Development (DEED) highlighted 11,400 jobs lost statewide in April of this year. The largest losses occurred in trade, transportation, utilities, and government sectors. The information, education, and health care sectors all grew during the month. 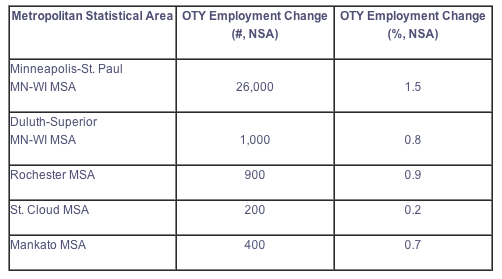 The Twin Cities Metro Area has bucked the statewide trend, having added 26,000 jobs over the past year. A market report by Marcus & Millichap predicts that the metro will add 49,000 jobs during 2013, of which a significant number will be in the health services sector. This employment growth, couple with stronger renter demand, has kept multifamily vacancy in the range of 2.5%, among the lowest rates in the nation.

The Twin Cities metro has added jobs every year since 2009 (source: Marcus & Milllichap)

Will Millennials Buy Homes Online? The Chinese Already Are

Why the Housing Market Is Poised to Enter a ‘Virtuous Cycle’