Jones Lang LaSalle recently released its 2013 Skyline Review, a report on CBD office markets in major cities across the country. The review offers an inside look at occupancy in Trophy and Class A buildings in downtown Minneapolis. That “Minneapolis Skyline” building set currently has an overall vacancy of 12%, compared to about 15% in the overall Minneapolis CBD office market. Tenants pay a premium to be in “Skyline” buildings, with rents about 16% higher than comparable office rents in non-Skyline buildings.

The Target headquarters creates demand for nearby office space for vendors that want close proximity to the retail giant. 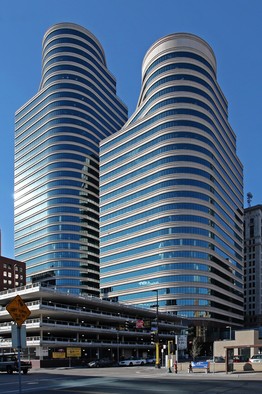 Skyline buildings located along Nicollet Mall perform especially well, with an average vacancy of just 6%. Space on high-rise floors also performs well, with vacancy currently at about 9.5%. The report noted the draw of the Target Corporation headquarters (at 10th & Nicollet) which many vendors want to be close to, creating high demand for office space in the vicinity.

The performance of individual Skyline buildings varies widely. Buildings with the lowest vacancy are 33 South Sixth, the IDS Center, and Wells Fargo Center, all of which have less than 5% vacancy on over 1 million square feet of rentable area. On the other end of the spectrum is Fifth Street Towers, with vacancy hovering at about 35% on just over 1 million square feet combined in the property’s two towers. The highest current asking rent for office space in Skyline buildings can be found in the Wells Fargo Center, at $37 psf for a full service lease. However, asking rents in the range of $25-$28 are common for many of the less high-profile Skyline buildings.