The unusually low inventory of homes for sale has had a two-fold effect: crews are building more new homes and there’s an upward pressure on asking prices. 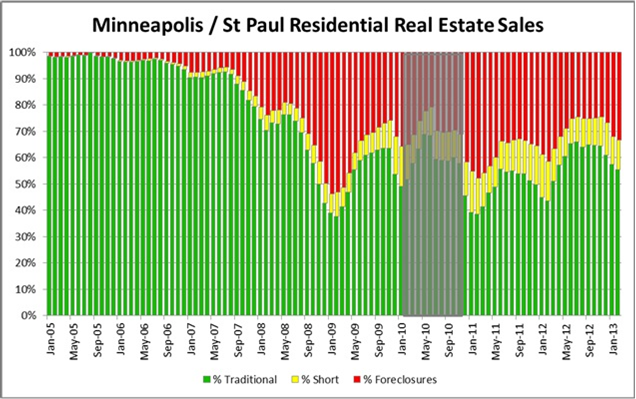 Minneapolis, Minn.  —   An analysis of Twin Cities real estate data for February shows that the housing market is continuing to recover along with the economy; home prices, new-home construction, and the percentage of traditional sales (not foreclosures) are all on the upswing.

Meanwhile, a historically low number of homes on the market is continuing to put upward pressure on sale prices.

That’s according to the Residential Real Estate Price Report Index, a monthly analysis of the 13-county metro area prepared by the Shenehon Center for Real Estate at St. Thomas’ Opus College of Business.

Each month the center tracks nine housing-market data elements, including the median price for three types of sales: nondistressed (traditional-type sales), foreclosures, and short sales (when a home is sold for less than the outstanding mortgage balance).

Herb Tousley, director of real estate programs at the university, expects home prices to increase in the coming months because of normal seasonal fluctuations and because of the tight inventory of homes on the market. “As median sale prices increase and homeowners’ equity positions improve, more homes should be listed for sale.” He added that the number of distressed properties available for sale should continue to decrease as the economy continues to improve and the number of foreclosures continues to moderate.

The Twin Cities saw 921 foreclosure sales in February 2013, down from 1,191 in February in 2012. Tousley pointed to the type of closed sales as an early indicator that the Twin Cities is on the path to a more healthy housing market. The total volume of closed sales in February 2013 was down slightly from February 2012. However, the percentage of traditional (nondistressed) sales in February last year was 43.5 percent of the total, and this February it is 55.3 percent of the total. “The past few months of having traditional sales total at least 50 percent of all sales is an encouraging sign that distressed properties are becoming less numerous and as we move into the spring and summer of this year we should see a stronger housing  market that is dominated by traditional sales,” he said.

And while the low inventory of homes on the market is putting upward pressure on home prices, it also is creating opportunities for new-home builders. “Data show that the construction and sale of new homes is beginning to play a larger role in the Minneapolis-St. Paul housing market,” Tousley said. In January 2013 there were 360 building permits issued for single-family home construction. This is an 80 percent increase compared to 200 permits issued in January 2012. The closed-sales data in February shows a similar trend. In February 2013, 7 percent of the closed sales were new construction, up from 5.4 percent in February 2012.

More details about the market, including an analysis of distressed-property sales during the winter months, can be found on the Shenehon Center’s website: http://www.stthomas.edu/business/centers/shenehon/research/default.html.

Minneapolis / St. Paul is One of only 3 U S Major Metros Where Owning is Cheaper than Renting

Time for Reform of Federal Involvement in Real Estate?