Fewer Retailers Kicking the Can Down the Road

Few real estate sectors are as uncertain as retail these days. Retailers hit hard by the economic downturn are simultaneously dealing with rapid shifts in consumer shopping trends due to technological change. Many companies have closed unprofitable stores, but strategic uncertainty remains with regards to marginal stores that could become unprofitable in the near future. This uncertainty has resulted in an explosion in the number of short term lease renewals in recent years. 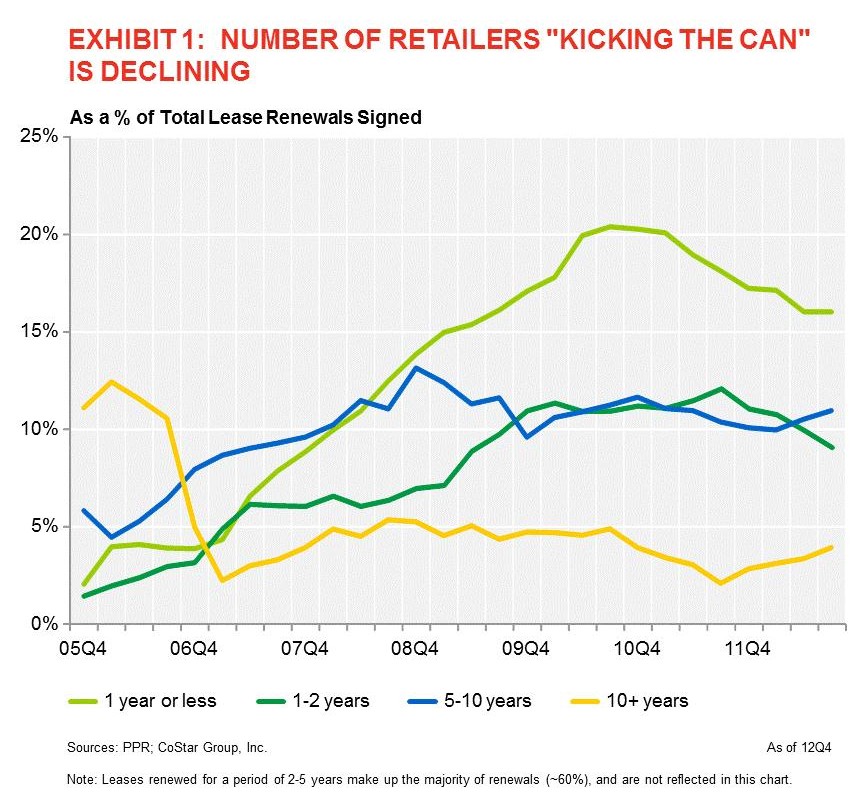 Fewer Retailers Are Kicking the Can, But Uncertainty Remains (Source: CoStar)

Analysis by CoStar shows that the percentage of retail leases renewed for terms of 1 year or less skyrocketed from less than 3% to 20% between 2006 and 2010.  Renewals for terms of 2 to 5 years (not pictured) fell from a whopping 80% of all retail lease renewals in 2006 to just 50% in 2010. These trends show an increasing focus on avoiding long term commitments as retailers seek the flexibility to be able to right-size their real estate footprint should sales decline. Even long term renewals were often not as long as they once where; renewals for 10 years or more fell below 5%, while there was a slight increase in renewals for periods of 5 to 10 years.

The good news for retail real estate is that in the past year these trends have started to reverse. Renewals for terms of 1 year or less fell to 16% of total renewals, well down from the peak of 20%. Renewals for 2-5, 5-10, and 10+ years have all increased since the first quarter of 2012. However, uncertainty remains and more rounds of store closings are on the horizon for major retailers. While there are signs of recovery, it seems unlikely that retail real estate will regain its pre-2007 foothold in the near future.

An Ode to the Oscar’s “In Memoriam” Video: We Bring You Twin Cities Real Estate – In Memoriam