The Minnesota Real Estate Hall of Fame has been established to honor, preserve and perpetuate the names and outstanding accomplishments of real estate leaders who have made a significant contribution in real estate and demonstrated care and concern for improving their community as a business leader.

The Shenehon Center for Real Estate at the University of St. Thomas Opus College of Business began honoring members of the Minnesota real estate community with induction into the Minnesota Real Estate Hall of Fame in 2010. 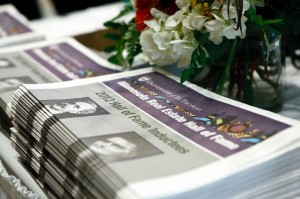 Nominations are now being accepted for the 2013 Minnesota Real Estation Hall of Fame.

A real estate leader is someone who:

Do you know someone who fits this description? Nominate them for the Minnesota Real Estate Hall of Fame.

Nominations are not limited to University of St Thomas graduates.   The selection committee will give weight to such accomplishments as starting and building a business, leading an established business to significantly greater achievements, major transactions and innovative projects.

Other factors that may be considered include industry recognitions, being an industry pioneer or leader and recognition by others for achievements. The selection committee has the responsibility and discretionary power to make its determinations from the pool of nominations submitted.