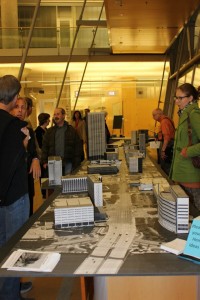 The oldest street in Minneapolis is spurring conversation.  From the Walker Art Center to the Mississippi River, community members and users of Hennepin Ave are being asked, “What should Hennepin look like? What should it feel like? How can we preserve and honor its history?”

Plan-It and Talk-It Hennepin, an “artist-led” urban place-making process led by the Hennepin Theater Trust, along with its partners, Walker Art Center, Artspace, and the City of Minneapolis are tackling just these questions.  Working to create a “re-energized and refreshed” Hennepin Avenue, the groups are working together and engaging the public to put forth development plans including public art concepts for the historic corridor.  The yearlong initiative will lead to plans to include “recommendations for transit and infrastructure improvements, public art, streetscape designs and ways to increase cultural events and collaboration among the Avenue’s many cultural, business and educational organizations.”

Funding the creative placemaking project is a $200,000 “Our Town” grant awarded last year to the Hennepin Theater Trust from the National Endowment for the Arts, along with a $50,000 matching endowment from the City of Minneapolis.

For the first several months, efforts focused around conducting qualitative market research, connecting with users of Hennepin Ave and listening to their perspectives on how Hennepin Ave. could be improved.   These interviews are particularly interesting as they include a kaleidoscope of perspectives, illustrating both the current positive (location, access, some amenities) and negative (illegal activities, lack of green space and public space) aspects of the site.

A few of the street interviews conducted by the Hennepin Theater Trust are posted below.  The first, interviewing Lee Lynch, former CEO of advertising agency Carmichael Lynch, shares the transformation and some challenges of Hennepin Avenue experienced over the last 30 years.

Another street videos conducted by the Hennepin Theater Trust where a Minneapolis teen communicates the “bad influences that kids have to live with while growing up in the city, and how creativity and motivation are essential to having a better life”.

Over the next few months, the public discussion will continue around the redevelopment of Hennepin Ave via the Talk-It Series.  Talk-It Hennepin is a free, four-part series covering the history of Hennepin Avenue to emerging cultural districts and global trends in urban planning, transit and public space.   The series presents notable speakers with coinciding workshops bridging ideas between leading urban professionals, Hennepin Avenue stakeholders, and the public.

Tom Hoch, Hennepin Theatre Trust President and CEO believes, “With a little more conversation and coordination among these groups, we believe Hennepin Avenue could see a big uptick in the volume of visitors and arts activities.”

Upcoming Talk-It events are designed to get the public and stakeholders thinking about the corridor in new way.  Upcoming speakers for the series include Candy Cheng and Charles Landry.

Candy Cheng, artist, designer, urban planner and co-founder of the New Orleans-based studio Civic Center, will be speaking on Creative Urban Interventions (April 26).  Cheng’s projects include an influx of street art, urban planning and social activism. Cheng became well-known for post-Hurricane Katrina work in New Orleans with Before I Die, where she worked to ignite conversations among strangers in public places.  By transforming an abandoned house in New Orleans into an interactive wall, she created an accessible public forum for all residents to “share their dreams”.   Her I Wish This Was projects are also highly regarded, where worked to engage the public to express what they wanted vacant storefronts to transform to within their communities with fill in the blank stickers.

Charles Landry, regarded as one of the most influential names in Urban planning, will be speaking on Creating Urban Vision (April 28).   Landry works to “helps cities transform their thinking in order to assess their potential afresh.”  Author of The Creative City:  A toolkit for Urban Innovators and The Art of City making, Landry works to “inspire, stimulate, challenge and facilitate”.  By combining a global perspective with an “acute sense” of what matters locally, he grounds ideas and development concepts in practically.

The talks and workshops will serve as an excellent opportunity for anyone interested in redevelopment, urbanism and planning; and particularly for those interested in having a say in what a reenergized and refreshed Hennepin Ave should look like.

The Walker Art Center Teen Arts Council (WACTAC) recently made the video below showcasing their ideas of what more connected and lively future should include.  What are yours?

Learn more and keep informed on the project via Plan-It Hennepin’s facebook page.