Interested in what the UST Real Estate program has to offer? Students (both undergraduate and graduate) interested in International Real Estate Development have the opportunity to study in Grand Cayman (while escaping January in Minnesota!) Read on to learn what graduate student, Tim Lawrence, had to say about his experience studying International RE Development in Grand Cayman.

Can you provide a little background on what the overall course goals/objectives are?

We have been studying a large planned-use development on Grand Cayman called Camana Bay.  The project is being developed by Dart Realty (Cayman) Ltd., which is a subsidiary of Dart Enterprises.  So far, only a very small portion of the planned development is completed.  Dart plans to continue development in phases over several years.

Can you explain what your typical work-day is like when in the Cayman Islands?

Most of our time in the Cayman Islands was spent exploring.  We were trying to gain an understanding of the Island’s unique political, business and geographic circumstances.  Specifically, we were interested in the similarities and differences between the Cayman Island and other markets (both domestic and global) and the effect this has on Real Estate and Development.  We met with representatives of both Dart and The Cayman Islands Planning Department. 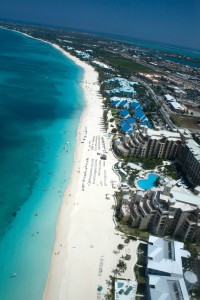 Obviously tourism is a large part of the island’s economy, and that means that our time spent away from studying Real Estate and Development on the island felt a lot like a vacation.  I went snorkeling a few times.  Seven-Mile Beach is a great place to be in January!

Most visitors to Grand Cayman come by cruise ship; and they don’t usually stay for more than half of a day.  Being there longer, and experiencing the island from an economic perspective, we certainly had a unique experience.

Is this the first opportunity you have had working on a development abroad?

Yes; this is why a few of us in the program have been so interested in the addition of an optional international component to the program.  The nature of our industry has caused so much of it to be regional or even neighborhood-oriented.  Much of real estate is a “Main Street” business. We work in an industry of jurisdictions, networking, and local planning and political process.  Yet, we live in a world that is becoming increasingly global.  As economies continue to become more global in nature, it is ever more important for us to have a global understanding of the business we are involved in.

What have you found the most challenging aspect to be in international development?

Laws, systems or ownership, and markets differ just as they do from place to place in the United States.  However, those variations are more far more substantial and significant when the market is in a different country.  Legal systems in the Cayman Islands are derived from Britain, as they are in the United States.  But that just makes for some interesting similarities and distinctions.    Just as significant is the fact that it is an island nation, creating unique opportunities and challenges. 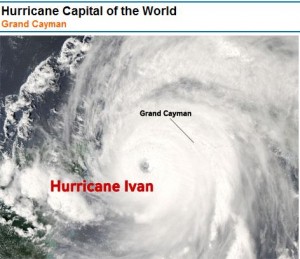 What has been the most valuable lesson learned from the class?

I was surprised by how culturally similar The Cayman Islands is to the United States.  Obviously, the U.S. has a major global influence.  The proximity of the Cayman to the U.S. increases that influence.  Yet, for such a small island, it is a very international place. To me it felt similar to an internationally-diverse neighborhood in large U.S. metro area, such as Miami.  In general, the economy of the Cayman Islands was much less insulated from the United States and World markets than I would have assumed.

The effect of the hurricanes was also interesting.  The U.S. is so large that when natural disaster hits the recovery is much easier because, no matter how serious, the affected area accounts for a much smaller part of the national economy.  Dart Realty is constructing the buildings in Camana Bay to hurricane standards.  The next generation of Caymanians will be able to see business- as-usual return more quickly as the existing structures on the island are replaced with modern buildings that are constructed to better withstand hurricanes.

How have the locals responded to development objectives?

The locals seemed to be incredibly diverse in their background and beliefs.  There is an array of viewpoints as wide as we might see throughout the entire United States all found on an island of less than 60,000 inhabitants. 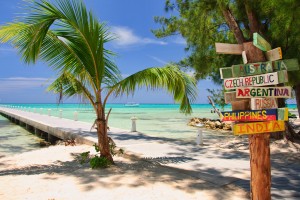 What pre-requisite classes did you find most helpful in preparing you for the International Development class?

I am not sure what prerequisites were required, since I have completed almost all of the coursework for the program. However, I think that REAL 770 (Real Estate Development) and BLAW 730 (Legal Issues in Real Estate) provide a very good foundation for studying an international real estate market.  As we continue to work on our project what we learned in REAL 746 (Market Analysis and Feasibility Studies) and REAL 760 (Investment Property Analysis) will probably also be useful.

What is the most fun thing you did in Grand Cayman?

The beach.  Conversing with locals at Coconut Joe’s.  Snorkeling.  It’s hard to decide.  Also, we discovered that the harbor-side couches at Ortanique in Camana Bay are a great place to spend a sunny, 75-degree Sunday afternoon.

Between ground transportation, meals, lodging, and entertainment money, what do you think a typical student should budget while taking this course?

It really depends on how much your lodging cost and how much/where you eat out.  I would say $1,000 for transportation, $1,000 for lodging and $1,000 for meals and expenses would be good estimates for a 7-day trip.  If you can find a particularly good deal on air fare or lodging you can do better.  And, of course, expenses vary a lot depending on what you eat and decide to spend your free time doing.

Tim Lawrence began his graduate work in 2009 and will complete the Real Estate MS Degree program this May.  Tim owns and operates the, Terrager Corporation, a Minneapolis based real estate brokerage with a focus on location consulting for developers and retailers.

Join the UST MSRE at our new campus in St. Thomas