You’re probably seeing headlines communicating the thousands of foreclosures initially delayed are now making their way through judicial proceedings. Recently, RealtyTrac CEO Brandon Moore noted that 21 states (including Minnesota) saw foreclosure filings rise from a year earlier stating “February’s numbers point to a gradually rising foreclosure tide as some of the barriers that have been holding back foreclosures are removed, that should result in more states posting annual increases in the coming months.”

However, this second ‘flood’ of foreclosed residential properties entering the real estate marketplace will likely not have the same detrimental effects on the housing market and economy as witnessed in prior years.  Here are some reasons not to freak.

Simply put, this second round has been strategically delayed to both properly process and sell off the necessary foreclosures.

First, the $25 Billion foreclosure and mortgage settlement will help pave the way to properly process foreclosures.  I.E. if one applies for a loan medication or is a day late with their mortgage payment, they will now not be improperly foreclosed upon by once overzealous robo-signers.  As recently posted, the $25 billion settlement with the five largest mortgage lenders over foreclosure abuses, will reduce nearly 1 million loans, compensate Americans wrongfully foreclosed upon with payments ranging from $2,000 – $750,000 and refinance mortgages for underwater borrowers over the next 3 years.

Second, this new round of foreclosure proceedings has been strategically timed alongside the Obama Administration’s housing recovery plan allowing real estate investors to acquire distressed properties in bulk.  Obama’s pilot program was recently utilized by an investment group who purchased 1,000 properties Phoenix, Arizona.  Now, this once distressed group of real estate assets is being rented back to those who were foreclosed upon!  Several months ago, the largest players in the market were “deploying hundreds of millions of dollars, not the billions necessary to make a major dent,” however the new pilot program allows investors to further bridge the gap, and fill an important niche missing in many depressed housing markets.

Further, it is also important to consider our local market place.  Minneapolis/St. Paul simply has better economic indicators than the nation as a whole.

Locally, the Minneapolis/ St. Paul residential market is seeing strong signs of housing recovery.  As evidenced by the chart provided by the Minneapolis Association of Realtors (MARR), inventory is diminishing as pending and closed sales exceed the number of new listings.  According to MAAR, for the month of February, new listings in the Twin Cities region increased 1.1 percent to 5,366, Pending Sales were up 34.2 percent to 3,756. Inventory levels shrank 27.2 percent (16,689 units).  The association reports, “There are still some challenges to work through, but pessimism is no longer in vogue. Laments over things like unemployment and high gas prices are being replaced with chatter about job prospects and sensible home shopping. The economy and housing market are by no means recovered, but it’s okay to think positive.” 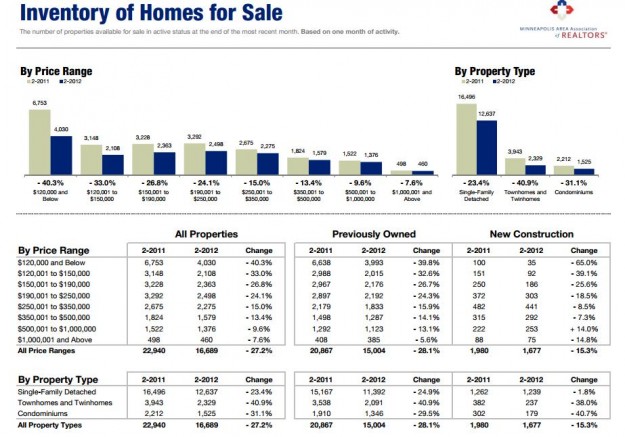 Additionally, Metro area unemployment dropped again last month to 5.6% (compared to 8.3% nationally). The 5.6% unemployment is particularly inspiring when one considers even in a strong economy, 3-5% unemployment is normal.  According to CNN money, Economists “used to say an unemployment rate around 5% was normal, but the recession may have changed all that” bringing to ‘normal unemployment’ levels to the 6% range. DEED Commissioner Mark Phillips said the “Robust job growth in January points to an economy that is gaining momentum. The private sector has been particularly strong, adding 27,200 jobs in the past two months alone.”

The next round of foreclosures is simply needed to return our economy’s balance.    Homeownership levels are retuning return to normal percentages.  In 2007 we experienced historically high levels of homeownership in the 68-69 percentiles, and are now returning to sustainable levels in the 62-63 percentiles.   An ugly, but necessary cleanse we are optimistically experiencing a final stage of.