Outlook 2012: Where Minneapolis Stands in the CRE Cycle

At the event, Integra presented their comprehensive data detailing market conditions and forecasts as presented in the organization’s outlook Viewpoint 2012. The panelists, who consisted of local and national experts in the areas of office, retail, multi-family and industrial real estate, discussed Integra’s findings and issues surrounding each of the 4 commercial sectors.

As depicted on the graph below, the CRE cycle as presented by Integra has 4 main cycles/phases termed Recovery, Expansion, Hypersupply, and Recession. There are 3 stages (Stages 1, 2, and 3) with each market phase. The 1st stage indicates the entry of the new phase, and the 3rd stage indicating the near exit of the phase. 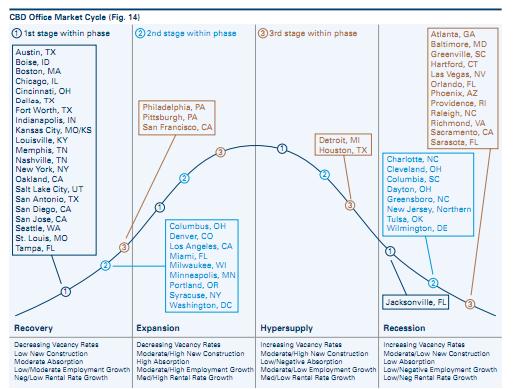 These four main phases of the RE cycle are defined by Integra are as follows:

So, where is Minneapolis in all of this in early 2012?

According to Integra, the Office markets (both the CBD and suburban) are in stage 2 of the Recovery phase.  2011 was noted by the panelist to be a big recovery year for office, wherein the month of December alone $300 million in office sales were transacted.  With very few developments, there has been stabilization in vacancy rates.  The panelists considered the office markets may very like be stuck in stage 2 of the recovery stage for the next few years in that the outlook for job growth is fairly bleak which of course ultimately drives the demand for office.  As hiring and growth is based on investor certainty; investor confidence around banks, government, the economy, and sovereign debt must improve before the office market advances to the expansion phase. In terms of what they believe will be coming to the market, panelist communicated there would be much more “quality real estate” coming through in 2012 as assets controlled by specials services have loans coming due. 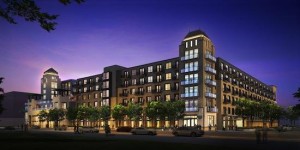 The Retail market is in its last spened, but sill many had to close their doors or give up space.  One such example, is the Bloomingdale store closure at the Mall of America (MOA).  Bloomingdale’s was the original tenant anchor with MOA and apparently received a very good remuneration agreement.  Dave Brennan, co-director of the Institute for Retailing Excellence at the University of St. Thomas, along with several other local real estate experts believe this may not be a bad deal for MOA.  Brennan estimates Bloomingdales generated $20 million to $25 million per year in revenue which is less than would be expected at such a location.  MOA is currently considering dividing up the former space into 5 retail tenant spaces which could turn out to be a much better deal for the destination shopping giant in the long run.

Minneapolis’ Apartment market is in first stage of the Expansion phase.  This can be evidenced by the decreasing vacancy rates (Minneapolis vacancy rate is currently around 2.5-3%) and numerous new apartments concepts proposed, underway and developed. According to panelist Abe Appert, First Vice President with CB Richard Ellis, 2011 witnessed a doubling of sales activity with $380 million in transactions.  Still however, these transactions amounted to approximately ½ of the transactions of 2006 and this sector is still below $60 million in historical averages. Competition to purchase multifamily units in the local market is fierce.  Appert continued, his team received 63 confidentially agreements for a class c multifamily property in an outer ring suburb.  As buy side demand grossly outweighs supply, $500 million in 2011 was unsuccessful in purchasing.  Developers in this market have been on a tear, working to meet the multifamily demand, there have been numerous high-end apartment projects underway including the flux, Pillsbury A, Dinkydome, 1800 Lake, 222 Hennepin among others.
Lastly, the Industrial market is believed to be in the first stage of the Recovery phase.  The 2011 industrial market showed overall positive absorption yet it remains extremely depressed in some areas, with many manufacturing lost when the recession began.   According to Dr. Ernest Goss with Creighton University, “Minnesota gained both durable and nondurable manufacturing jobs” in 2010, “However even with healthy economic growth for 2011, the state will not recover the manufacturing jobs lost since the recession began.”  Manufacturing jobs will be key for industrial to advance from recovery to expansion in the Minneapolis market.

One industrial sector seeing demand are “flex-spaces” (i.e. office-warehouse or office-show room), whereby the property features a combination of unfinished bulk warehouse space with a smaller, finished office or retail component.  Flex space is an attractive option as the space can be altered with ease to meet the user’s evolving needs – finished space can be added or subtracted as the tenant’s business evolves. 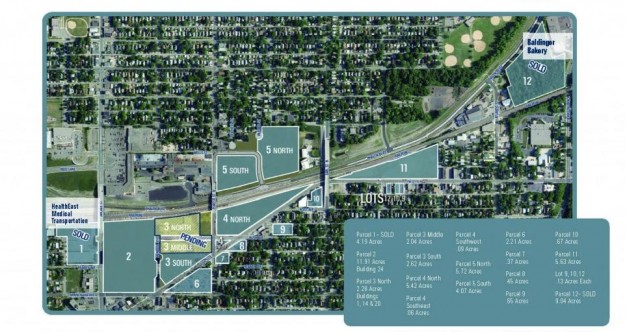 Should Property Owners Be Required to Provide Air Conditioning to Tenants?