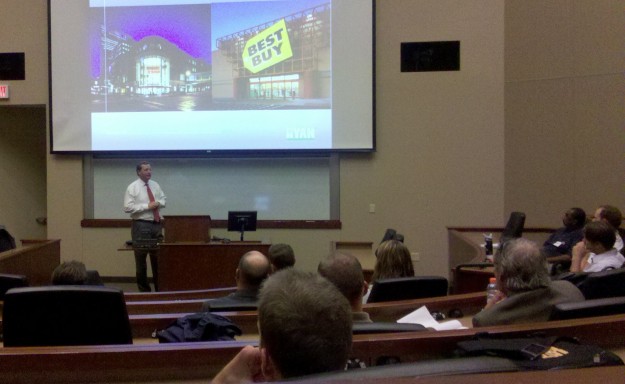 On Tuesday night Collin Barr shared words of wisdom with a receptive audience of local commercial real estate graduate students and industry leaders.  Leading up to his current position with Ryan Companies, Barr shared stories of triumph and tragedy during his early career which started at IBM and lead him to Trammel Crow, CRESA Partners, and finally Caribou coffee, where he traveled frequently directing the development of new stores.  “It was all worth it,” notes Barr, as he now oversees the Midwest region of Ryan Companies, a firm that has excelled despite a historic decline in local construction projects.

Ryan Companies’ business model focuses on “Integrated Project Delivery” meaning that they offer every service a commercial real estate client may require – from design-build to capital funding to real estate management, and many technical and professional services in between.  While Ryan previously dominated the construction market for high-end office and industrial uses, they have now branched out into other market sectors including multifamily, senior living, data centers, and distribution centers in Canada.  In fact, Ryan is currently developing three distribution centers for Target in Canada.  Barr notes that the development process in Canada is strikingly similar to that of the U.S.  “Had we known it was so similar,” says Barr, “we probably would have started working in Canada sooner.”

The topic on everyone’s minds – what will become of the former Jaguar site at Hennepin Avenue and Washington Avenue was addressed as Barr revealed plans for Ryan’s upcoming mixed-use project.  222 Hennepin Avenue received approval from the city planning commission on Monday and will become fully entitled within three weeks.  Ryan will begin construction in December on the project which is slated to include 283 market rate units at rents of $2.00 per square foot.  A grocery store will anchor the first floor of the building and units should be ready for move in by spring of 2013.  Barr stated that demand for multifamily has been fierce; in fact, Ryan has received offers to purchase the project upon completion at low cap rates in the range of 5%.  While some city council members wanted to see a high rise on the site, Barr explained that construction costs for a tower would require rents of $2.50 per square foot, which he does not believe the market can support.

During the next wave of commercial construction, Ryan projects that only 1.5 to 2 million square feet of new office space in downtown Minneapolis will be built, since rents of $22-30 per square foot are needed to support new construction.  Instead of multi-tenant office buildings, demand will focus on build-to-suit projects for individual users.  Any multi-tenant buildings that are constructed must be highly modern and efficient to attract tenants.  A recent example is Ryan’s Two MarketPointe office project near I-494 and France Avenue , which is the first suburban office building in Minnesota to achieve LEED gold certification and utilize an under-floor air delivery system for maximum efficiency and occupant comfort.

Out-of-state distribution centers comprise a fair amount of Ryan’s work these days, and Ryan companies, while founded in Minnesota, has now completed projects in 42 states.  While retail projects have decreased locally, there is activity in other regions.  A two-story urban Target store was recently completed by Ryan in Madison, Wisconsin.  As for suburban retail centers, the standard site plan has changed from a 50-60 acre parcel with several anchors to a 20-acre site with one anchor.  “While not as exciting,” quips Barr, “It’s what is financially viable.”

One of Ryan’s most exciting projects came in the form of the Foshay building’s need for a fine dining restaurant.  Manny’s Steakhouse, a deal that was initiated with a letter-of-intent on a napkin, was designed, built, and opened within just 60 days.  The eatery has been a huge success, doubling its revenue from its previous location, and has greatly contributed to the success of the W Hotel.

As Ryan Companies launches into the future with biofuels, historic tax credit properties, and other unique projects that are viable in today’s market, Barr encourages others in the industry to ask themselves a few important questions:

Is your ladder leaning up against the right wall?
Are you working for or with the right people?
Are you paying the price to be the best?

With the commercial real estate industry being such a tight-knit and competitive one, Barr emphasizes to make the most of your connections, focus on where you want to be in 10-15 years, and work hard every day to stay competitive.  Collin Barr embodies the philosophy of Ryan companies, building lasting relationships to create a thriving future.