“For those in real estate, the events of September 11, 2001, continue to have a profound effect on the industry, ranging from a renewed focus on security and building safety, to radical notions on the future of cities.”

A full decade following the tragic events of Sept 11, 2001, downtown New York is moving quickly toward one of the most dramatic transformations of its urban landscape of the last century. 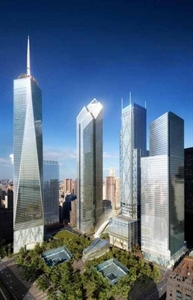 Two new skyscrapers totaling 4.8 million square feet are under construction, along with a memorial and museum dedicated to the more than 3,000 people who died in the horrific attacks.

Other recent notable achievements for the area include publisher Condé Nast’s momentous decision to move its headquarters downtown and become 1 World Trade Center‘s anchor tenant, and the recent completion of architect Frank Gehry’s and developer Forest City Ratner’s remarkable 76-story luxury apartment tower at 8 Spruce Street, which is billed as “the tallest residential building in the Western Hemisphere,” and hailed by some critics as the best new skyscraper in New York City in decades.

Meanwhile, World Trade Center developer Larry Silverstein believes two additional office towers could be built at the WTC site by 2015. Given the extent of the transformation seen in this market, perhaps anything is possible.

“Cities like New York have become extraordinary magnets attracting America’s best and brightest,” said Alan L. Stein, executive director of Cushman & Wakefield, who along with colleague Tara I. Stacom leads Cushman’s office leasing efforts at 1World Trade Center. “There’s a certain critical mass that breeds more of the same. Companies locate downtown because their competition, and the talent they need to power their company, is there.”

“Sept. 11 accelerated rather than hindered that process. The changing landscape downtown created an opportunity that’s being realized today.”

New Yorkers themselves, while vowing to never forget the attack, seem more focused on the promise of the future than the tragedy of the past. Mayor Michael Bloomberg spoke to the sense of progress and transition that seems to define New York City when he said, “We will never forget the devastation of the area that came to be known as ‘Ground Zero.’ Never. But the time has come to call those 16 acres what they are: The World Trade Center and the National September 11th Memorial and Museum.”

For those in real estate, the events of September 11, 2001, continue to have a profound effect on the industry, ranging from a renewed focus on security and building safety, to radical notions on the future of cities.

“After the attacks, a lot of people had doubts about whether or not cities would empty out and the work force would decentralize, particularly with the rise of the Internet, which allowed people to work in different ways,” said Patrick L. Phillips, chief executive officer of the Urban Land Institute (ULI). “The city has endured.”

The terrorist attacks changed the world, and with it, the physical shape of the built space and the business of commercial real estate. Commercial property professionals are still grappling with the changes and incorporating best practices to keep their buildings and tenants safe, an effort accentuated by technology, according to Dan Pufunt, president of property management for Jones Lang LaSalle.

“The impact of September 11 was far-reaching — not only on deeply personal, social and political levels, but across different industries,” said Pufunt, “For the commercial real estate industry, specifically, it spurred a movement toward increased risk management and emergency preparedness like never before.”

“Overall, I believe that the attitudes of most property managers and owners remain in a heightened security state following 9/11, but the fact is many security budgets have decreased over time,” added Mark Anderson, Jones Lang LaSalle’s national security liaison and security director at 71 S. Wacker in Chicago. “Building owners and managers need to understand the importance of minimizing risk and developing emergency response plans.”

The Building Owners and Managers Association (BOMA) International, which represents professionals at the front lines of building security, said the industry has stepped up its use in the largest markets of electronic and optical identification and monitoring, X-ray machines and metal detectors, and the use of bomb dogs. Major metros have re-written fire evacuation laws in an effort to minimize potential casualties from future events, requiring at least annual practice evacuations. Meanwhile, building management is using “smart” video software to track suspicious activity.

Balancing the sometimes-competing goals of enhanced security and public accessibility is a major concern for the projects under construction or at various stages of planning at the World Trade Center site, where the two buildings in Lower Manhattan are the largest pending office developments in the U.S., according to CoStar information.

In fact, the 4.8 million square feet under way at the World Trade Center site account for 38% of all CBD office space under construction in the U.S., according to Cushman & Wakefield, which along with The Durst Organization, are exclusive leasing and marketing agents for 1 World Trade Center. Projects underway or planned at the site include the following:

* 1 World Trade Center, a 104-story tower at the northwest corner of West Greenwich, Vesey and Fulton streets. Construction has reached the 81st floor at the skyscraper, which will top out at 1,776 feet when completed in late 2013 or early 2014, making it the tallest building in the Western hemisphere. The 3 million-square-foot project developed by the Port Authority of New York/New Jersey and The Durst Organization includes 40,000 square feet of retail and 71 floors of office space.

* 2 World Trade Center at 200 Greenwich St, slated to include 2.4 million square feet of office space and 130,000 square feet of retail. The 88-story tower, designed by Foster & Partners, is currently under construction and slated to reach grade level by late this year, but will likely be the last of the WTC towers to come online. When complete, it will become the second-tallest New York skyscraper at 1,349 feet.

* 3 World Trade Center, a 2.4 million-square-foot project developed by Silverstein at 175 Greenwich St., also expected to reach grade level late this year with delivery projected for 2015. Construction includes a 71-story, 2.24 million-square-foot tower designed by Richard Rogers Partnership of the UK at the center of the buildings around the 9/11 memorial. The 1,140-foot tower will have five retail levels totaling 133,000 square feet, including two above the ground floor and two below grade.

* 4 World Trade Center, a 2.85 million-square-foot project at 150 Greenwich St. directly facing the 9/11 memorial and park under development by Silverstein Properties Inc., is under construction and scheduled for delivery in fall 2013. The 64-story tower designed by Maki & Associates will include 140,000 square feet of retail space in the first five floors. The Port Authority of New York and New Jersey and the City of New York will occupy two-thirds of the office space, and Silverstein Properties will lease the remainder to commercial tenants.

* 5 World Trade Center will stand at the site currently occupied by the remains of the Deutsche Bank building at 130 Liberty St., which was irreparably damaged in the terrorist attacks. Developed by the Lower Manhattan Development Corp., the tower will serve as the new headquarters for JPMorgan Chase’s investment bank.

Providing the huge development with its sense of place and purpose will be the National September 11 Memorial, designed by architect Michael Arad, which will be dedicated on Sunday, the 10th anniversary of the 9/11 attacks. A museum will open in 2012.

The WTC Port Authority Trans-Hudson (PATH) Transportation Hub, located at Church and Fulton streets, which began construction in 2007, will accommodate more than 250,000 pedestrians per day. The Fulton Street Transit Center will link 12 subway lines with the PATH and accommodate more than 300,000 riders daily.

“It’s hard to imagine a site that’s more fraught with emotional, and therefore political, complexity,” said ULI’s Phillips. “But 10 years on, there’s a million-square-foot anchor tenant in a dramatic and beautiful new building, there’s an adjacent office building that’s fully leased, there’s a global destination emerging in the form of the memorial and museum and the park and there’s an incredibly complex transportation solution to make all of it happen.

“That’s a lot to accomplish in 10 years, even under the best of circumstances,” he added.

The slow pace of project design and approval caused many to be skeptical about how much of the project would be completed before the 10-year mark. Just two projects totaling 3.7 million square feet have delivered in downtown since the 9/11 attacks, including 7 World Trade Center, a 52-story, 1.7-million-square foot building at 250 Greenwich St. built in 2006 by Silverstein Properties, and 200 West St. a 2 million-square-foot, 43-story office building with street-level retail space in Battery Park City. Opened in October 2009, the building, designed by Pei Cobb Freed & Partners, is the global headquarters for Goldman Sachs.

However, the most significant changes in the historic transformation of the Lower Manhattan market may still lie ahead. Over the next five years, the submarket will see a higher proportionate share of office leasing as the new supply makes rents more competitive with Midtown properties, Jones Lang LaSalle said in a report.

Professional services, media and technology are expected to take a greater share of office space even while Lower Manhattan maintains its status as financial hub of the world. Underscoring the trend is publisher Condé Nast, which signed a lease in May to become 1 World Trade Center’s anchor tenant, occupying 1,046,260 square feet for 25 years.

China Center New York LLC, a division of Vantone Industrial Co., Ltd., signed a 190,810 square-foot lease in March 2009. With another deal pending for an additional 300,000 square feet, 50% of the office space in the huge tower is now spoken for — three years before tenants will be able to move in, Stein noted.

“Along with the entire city, Lower Manhattan will continue to benefit from the continued migration of a highly educated, creative work force to urban centers,” said Peter Riguardi, president of Jones Lang LaSalle’s New York region.

Spearheading a real estate development project AND being a student