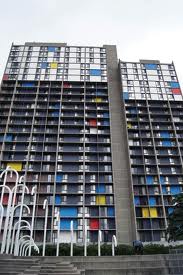 Rising up east of the downtown skyline is what Mayor R.T. Rybak refers to as the “Ellis Island” of Minneapolis.  Home to more than 4,440 residents, primarily immigrant families, Riverside Plaza is undergoing a well-deserved face lift.  Faded pink panels on the building’s highly noticeable exterior are being replaced with shiny bright white panels that reflect the building’s original modernist design.

The transformation of Minnesota’s largest affordable housing development is receiving accolades nationwide, nominated by Affordable Housing Finance Magazine as one of four national finalists in its Readers’ Choice Awards for a historic rehab and recently profiled in Tax Credit Advisor.  The 11-building, mixed-used campus which includes a K-8 charter school, grocery store, and tenant resource center, was originally built in the 1970’s as part of HUD’s “New Town-In Town” program.

Far from an ordinary rehab project, Riverside Plaza required collaboration of Minneapolis-based owner Sherman Associates with several federal, state and local government agencies to get the project off the ground.  This included working with the National Park Service to designate Riverside Plaza a national historic landmark in order to obtain sufficient financing for the $132 million undertaking.

Not only is it the largest affordable housing rehab, but Sherman Associates is also working with residents to relocate them temporarily while major components of their unit are upgraded including plumbing, fixtures, cabinets, and patio doors.  A KARE 11 interview with residents documented some of the work being performed and residents’ gratitude for the upgrades.  The new look is both modern and highly efficient.  Additional improvements in the building include new elevators, HVAC, and life-safety systems.

Stakeholders in the affordable housing industry are welcoming the awareness projects like Riverside Plaza are bringing to LIHTC (low-income housing tax credit) investment by private companies, particularly high-profile investors like Google, Inc., who invested in the project via a LIHTC fund managed by AEGON USA Realty Advisors.  Sherman obtained financing for construction and debt restructuring from a number of sources including HUD, the City of Minneapolis and Minnesota Housing Finance Agency.  Below is a breakdown of financing sources provided by Sherman Associates.

A study by Harvard Joint Center for Housing Studies released in April 2011 indicates that one in four renters, or 10.1 million households, are cost-burdened by housing, spending over half of their income on rent and utilities.  As local developers continue building pricey class-A apartment communities, projects like Riverside Plaza are becoming even more critical to sustain Twin Cities families at all economic levels.  Managing and investing its own capital in such an enormous project that will benefit low-income families, Sherman Associates is truly a role model for housing developers in Minnesota and nationwide.