The Met Council has contracted with national consultants to begin a study that will analyze issues surrounding the complicated task of redeveloping the largest brownfield “Superfund” site in Minnesota, the Twin Cities Army Ammunition Plant, to build a new Vikings Stadium.  The $1 billion project that would receive funding from the state, Ramsey County, and the Vikings, faces many challenges.  Will it be worth it?  We will eagerly await the results of the report this fall.

It’s not clear when or even if a new football stadium will be built in Arden Hills, but local agencies are kicking off the

latest round of studying the site, a complicated piece of real estate. 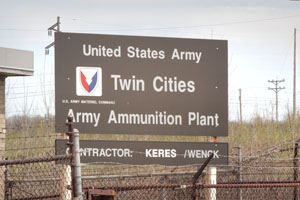 The sprawling Twin Cities Army Ammunition Plant (TCAAP) in Arden Hills has been proposed as the site for a new football stadium for the Minnesota Vikings. (File photo: Bill Klotz)

site in Arden Hills. North Carolina-based Kimley-Horn and Associates Inc. was the only respondent to the regional planning agency’s solicitation for proposals. A woman who answered the telephone at the St. Paul office of Kimley-Horn referred questions to the Met Council.

On Thursday, Met Council spokeswoman Meredith Salsbery said she could not comment on the value of the contract or the exact deadline for the work because both were still being negotiated. Salsbery said it’s likely the contract will be signed by Friday.

It’s still early in the game, but the aggressive schedule for the project doesn’t allow for many timeouts.

Documents outlining the scope of work indicated that the analysis “should be completed within 45 days.” An Aug. 12 solicitation letter from the Met Council said the work would be valued at “well under $100,000.”

Salsbery said the Met Council issued its request for proposals (RFP) to three companies and provided information to a fourth group that inquired.

“We issued an RFP to three firms. One firm responded,” Salsbery said.

The two other firms solicited by the Met Council were Omaha, Neb.-based HDR Inc. and Englewood, Colo.-based CH2M HILL. Salsbery said a fourth firm, Vadnais Heights-based SEH Inc., requested a copy of the RFP but did not respond.

Gov. Mark Dayton prompted the latest round of stadium study on Aug. 3 when he asked the Met Council and the Metropolitan Sports Facilities Commission (MSFC) to identify “all remaining issues” on the site — including planning, transportation, infrastructure and environmental issues — and make recommendations for how they could be resolved.

“I think everybody is eager to have the analysis,” Salsbery said, adding that the cost of the study would be split between the Met Council and the MSFC.

Dayton’s letter did not indicate whether he would call a special session, but referred to the Vikings as a “very important asset” and said “time is of the essence.” Asked a few days ago about the stadium issue, Dayton said, “It’s still a work in progress.”

Although the timetable is short, the list of issues up for study is long.

In May the Minnesota Vikings and Ramsey County announced an agreement to pursue the redevelopment of the expansive Arden Hills site, which is still owned by the federal government.

The plan calls for using 260 acres of the site for the stadium, setting aside another 170 acres for development.

But the Legislature has taken no action on the stadium issue.

Lester Bagley, vice president of public affairs and stadium development for the Vikings, said the team is still hoping for a special session dealing with the stadium this fall.

“We’re anxious to get it going and get the answers they need so we can get a package together and have a discussion yet this fall in a special session, should the governor decide to call one,” Bagley said.

Bagley said the remaining issues include who would bear the costs of potential stadium and transportation cost overruns, and who is in charge of the project.

“It’s most likely the team will bear the costs of the overruns, but that would assume we would have control over the construction project,” Bagley said.

The TCAAP site has been considered for redevelopment since the 1990s. The Minneapolis-based developer Ryan Cos. pursued an ambitious mixed-use plan there for more than five years but terminated its preliminary development agreement with the city in spring 2009. Daunting cleanup costs for the land, the largest Superfund site in Minnesota, were a factor.

Meanwhile, Minneapolis officials would still prefer to keep the team in their city. But for the moment, they are sitting on the sidelines.

“The Vikings are working with Ramsey County, and that’s their preference. We’re all waiting to see if they’re going to be able to pull that off,” said John Stiles, spokesman for Minneapolis Mayor R.T. Rybak.

Stiles said Rybak remains in touch with the team.

“The mayor is in pretty regular contact with them. If there’s an opportunity to work more directly with them to keep the team in Minneapolis, we’re all ears,” Stiles said.

Not everyone in the east metro area has embraced the idea. In early July the St. Paul City Council unanimously passed a resolution opposing a countywide sales tax increase. St. Paul elected officials have lamented the lack of direct benefit of the stadium to the city of St. Paul and said a statewide tax increase would be more equitable.

State Sen. John Marty, a DFLer from Roseville and a consistent critic of public funding for stadium projects, charges that government agencies studying the issue appear to be representing the team, not the taxpayers.

“Both sides are on the same side of the negotiating table. The only thing is they’ve got to package it in a way that they think won’t create riots,” he said of the proposed financing deal.

Marty said he has heard talk in the news media about a potential special session to address the stadium, but he isn’t hearing much about it in St. Paul. “I have heard zero talk about it at the Capitol,” Marty said.

Stadium studies typically ignore a fundamental question, Marty said: “Is this an appropriate thing to be doing or not?” The value of the Vikings has appreciated since owner Zygi Wilf bought the team, he said.

“It’s been a great investment for him. He’s not losing money and when we’re cutting education and cutting everything, I just think it’s unconscionable to be providing a subsidy for private business so they can make more money,” Marty said.

A Tremendous Demographic Shift – what does it mean for housing?