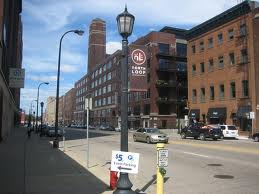 In Minneapolis, rentals are hot – so hot that an estimated 850 units are planned to come online within the next year or so, and that’s just in the North Loop.  Residents of the North Loop are enthused that the vision for the Twinsville neighborhood is finally taking shape, and it’s only the beginning.  Some North Loopers hope that the surge in housing and retail growth will help spark interest in building a new Vikings stadium in the lower North Loop on the current farmer’s market site.

“People who live in the North Loop are self-selected Pioneers,” states David Frank, President of the North Loop Neighborhood Association.  “If you’re someone who has selected to live in an urban environment with loading docks and industrial buildings, you want things to happen and are comfortable with change.  It’s a lot less clear what will happen with development in the neighborhood than if you live in a single family home in South Minneapolis.  My family and I are proud that we have chosen to live in the North Loop and to invest in making our neighborhood better.”

Frank explains that overall, the North Loop neighborhood has been supportive of new housing developments, especially proposed plans that contribute to establishing the North Loop as a pedestrian-friendly urban environment.  However, more affordable housing options continue to be an important objective and developers so far have not been stepping up to the plate.  Frank fears that if not enough affordable housing is built initially, the North Loop will become “a gated community” privy only to middle to high income earners.

Currently proposed developments include Ryan Companies’ 7-story, mixed use, 280-unit apartment building at the former Jaguar dealership site at 222 Hennepin Avenue.  Rumor has it that Whole Foods will anchor the project.  On Washington Avenue adjacent to Union Plaza, Hines Interests is pitching a three-phase development on the six acre site that will eventually incorporate several types of housing, retail, and offices.  The project will be launched with a 185-unit high-end apartment building called Dock Street Apartments.

Also on Washington Avenue are two potential developments by Greco, a mixed use  project with 130-unit market rate

apartments at 730 Washington Avenue North, which is a historic property, and 120 units at 607 Washington Avenue North, the Holden Building.  TE Miller Development is also stepping into the action with a proposal of 100 market rate units at a site that currently houses a vacant office building at 710 North Second Street.  The new 6-story building will offer mostly one bedroom units with overall rents in the $1,100-2,000 range.

Schafer Richardson, a developer that is no stranger to the North Loop, is planning to redevelop the historic Cameron building at 746 4th Street North.  The Cameron will be 42-46 market rate apartments and, according to the project team at Schafer Richardson, “will offer smaller unit sizes for value conscious young professionals who desire to be close to the activities and amenities that a downtown location offers.  Prospective renters will find studio, convertible, and one and two bedroom apartments with beautifully incorporated historic features and top of the line finishes. The Cameron will be an environmentally conscious development and incorporate sustainable features, including the renovation and re-use of a historic building. The Cameron will offer additional amenities including; enclosed bicycle storage, a fitness center, an outdoor lounge, and building Wi-Fi.  The Cameron’s target groundbreaking date is December 2011 and the project will utilize historic tax credits.”

Bruce Lambrecht, the real estate developer behind the concept of Twinsville, comments that the North Loop is ready to move on to planning the next stage, or “Twinsville 2.0.” “To really get a feel for what Twinsville 2.0 is, or should be, we need the Vikings in the farmer’s market site,” says Lambrecht.  With the North Loop continuing to grow as Minneapolis’ light rail commuter hub, it makes sense to some business leaders to take advantage of the already well-positioned site instead of investing additional dollars in infrastructure upgrades to support a new Vikings stadium elsewhere.  (View Lambrecht’s entire plan on Minnesota Public Radio News). 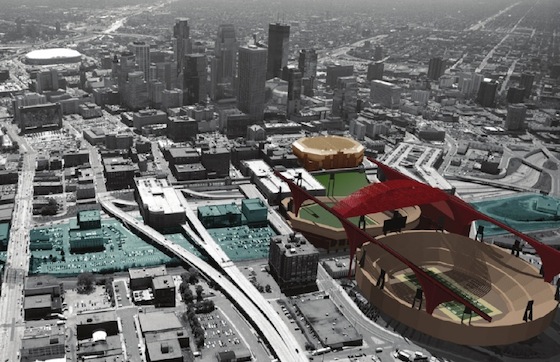 The North Loop Neighborhood Association Planning and Zoning Committee has outlined the criteria a Vikings stadium proposal would need to meet in order to be endorsed by the neighborhood.  While a new stadium would facilitate the North Loop’s goals of increasing retail commerce and residential density, the association seeks to ensure that the site would not interfere with connectivity for walking, biking, and transit.  Additionally, the project would receive greater support if the stadium has a roof enclosure, allowing it to be utilized as a year-round entertainment venue, not just a Vikings destination.  While sports stadiums add value to the North Loop, the ultimate goal is to create a vital interconnected web of housing, business, and entertainment, supported by many transit options.