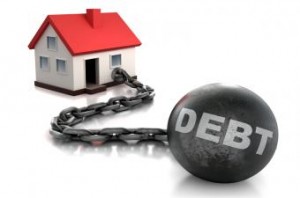 The Center says its last measure of home-cost challenges showed that 9.3 million homeowners paid more than half their income on their mortgage – and that was in 2009. With the state of the labor market only worsening since then, and not only unemployment but underemployment plaguing more and more American families, the figure has undoubtedly risen.

While low-income households are most likely to have such severe burdens, the Harvard researchers point out that cost pressures have been moving up the ladder to affect more moderate- and middle-income households. In fact, rates of severe-cost burden among households making between $45,000 and $60,000 per year has nearly doubled since 2001.

In addition to longstanding and worsening affordability challenges, the academia report points out that the housing crash and ensuing economic downturn drained household wealth, ruined the credit standing of many borrowers, and devastated communities with widespread foreclosures.  According to the Harvard Housing Center’s study, the collapse of house prices has left nearly 15 percent of homeowners with properties worth less than their mortgages and eroded the equity of most others.  Overall, the amount of real home equity fell from $14.9 trillion at its peak in the first quarter of 2006 to $6.3 trillion at the end of 2010 – well below the $10.1 trillion in outstanding mortgage debt, according to the report.

Meanwhile, the foreclosure crisis continues. The report cites statistics from Lender Processing Services which show that as of the end of March, about 2 million home loans were at least 90 days delinquent and another 2.2 million properties were still in the foreclosure pipeline. The LPS study found that 67 percent of these owners had made no payments in over a year, and 31 percent had gone for two years without a payment.

The crisis is especially acute in pockets across the country, according to the Harvard report, which notes that just 5 percent of census tracts have accounted for more than a third of all homes lost to foreclosure since 2008.  “It will take years for these neighborhoods – which are disproportionately minority – to recover from this calamity,” the researchers said. “As policymakers tackle the regulation and redesign of the mortgage market, it will be important to keep sight of the needs of these hard-hit communities.  On the foreclosure front, the Harvard report says the good news is that the share of home loans delinquent by at least three months dropped from 5.6 percent in early 2010 to 3.8 percent in March – a sign of light at the end of the tunnel, according to the researchers.