The current political theater in the United State regarding the federal deficit, taxes, the budget (etc.) is one of the most important debates taking place right now and the outcomes from forthcoming legislation will have far reaching implications for the country playing a major role in defining who we are as a nation. Unfortunately, the only thing that lawmakers can agree on is that their is a tremendous problem, and a lack of action will have devastating effects on the US economy. Furthermore, many of the proposals and news stories that emerge from the medias coverage of this topic is little more than political gamesmanship, and insults the intelligence of the electorate by turning a complex subject into a handful of talking points, which use misleading statistics, irrelevant information,  and worst of all, fear mongering to appease the most extreme groups on both sides. By moving further away from the middle, which statistically and practically represents the average attitudes of Americans, politicians are jeopardizing the economic future of the US. 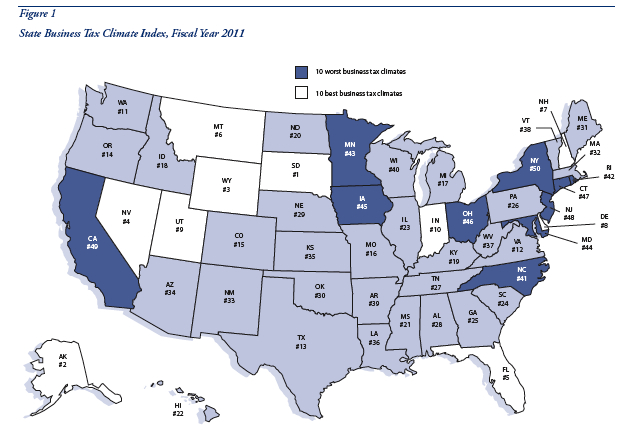 That said, when a news story is reported on the subject regarding a well reasoned and genuinely honest effort to ease some of the financial burden our government is facing, any educated and reasonable American must put their personal politics aside and objectively assess the merits of the proposed plan. In the April 5th edition of Finance & Commerce, Mark Anderson reports on a recent Minnesota State Senate bill that would phase out the state tax on commercial property. Currently, Minnesota is ranked 43rd by the Tax Foundation, a public policy think tank, on it’s overall business tax climate. This is a critical problem for the states economy, since 31.38% ($7.48B) of the states tax revenue comes from business taxes. Furthermore, Minnesota businesses are hiring new employees at a slower rate (.6%) than the national average. Attracting businesses to the state, who will hire Minnesotans and increase the states tax revenue is a priority that fortunately rises above politics and is one of the major goals of the current legislative session. The bill passed  37-26, representing a straight party line vote with Republicans voting for and Democrats against. The plan would reduce the statewide commercial property tax burden by $115M for 2012 and over the course of the next 10 year completely phase out the tax that will bring in an estimated $775M for the state this year (a conservative forward estimate, with 2.5% inflation and 2% economic growth for the state, would put the 2022 tax revenue loss at $1.204B).

Republicans argue that the tax savings will go directly into the hands of small business owners, providing the necessary free cash flow to hire additional workers, and reinvest in their business. Furthermore, Republicans are arguing that a reduction in the tax burden for businesses will help attract more businesses to the state. Democrats agree that it is necessary to promote Minnesota as a business friendly state, however they are suspect of the motives behind this legislation, as well as its implications for the state  budget and the programs that will be cut to offset the tax cut. According to John Marty, the ranking Democrat on the Senate Tax committee,

“Tax cuts do help job creation, but the revenue we’re losing would lead to job losses, too. It means layoffs of state and local government workers, and it hurts a number of things that support jobs. Revenue lost in the first two years of the phase-out, for instance, is nearly equivalent to cutbacks proposed in subsidies for sliding-fee child-care programs. That probably means child care businesses will close, but it also means that many workers won’t find affordable child care.”

Despite the bill clearing the Senate, the prevailing viewpoint at the capitol is that Governor Dayton will veto the legislation, and demand more concessions from the Republicans. However, Governor Dayton has surprised many conservatives and the business community by taking a pro-business stance on several major issues early in his term. At this point it is unknown how Mr. Dayton will respond to the legislation, but he is certainly interested in finding ways to improve the states economy, create jobs, and reduce the deficit. By focusing on these issues, and working with the legislators in office, Governor Dayton will doing his constituency a great favor.

To read the entire article click on this link