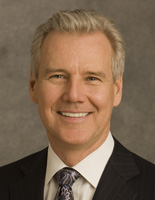 A simple question that was definitely on every attendee’s mind at the most recent Real Estate Executive Insight Series. However, the answer isn’t so simple, and if it were not for Bob Lux’s (principal at Alatus LLC) charisma, intelligence, and experience in leading major, press-worthy development projects the answer might not have been as well received. As any gifted public figure would, Mr. Lux skirted the question, but in his sidestep, alluded to several important things concerning the future of Block E, as well as the kind of person Mr. Lux is. Before his answer can be assessed properly, it is important to understand Mr. Lux’s history, professional accomplishments, and his philosophy on development (and life).

Mr. Lux grew up in a Long Prairie, a small community in central Minnesota, a town that most likely does not have a building higher than the many crop silos that dot the agrarian landscape. Like many young men from small towns, Mr. Lux left home in search of success and the experience that can only be found in the “big city”. After earning his degree in Business Administration from the University of Minnesota, Mr. Lux returned to Long Prairie with the intention of starting a home building business in the area. He purchased a lumber yard with his father and began building farmers homesteads in the immediate area. Although this was quite different than the projects he would eventually oversee, Mr. Lux quickly learned the importance of adding value to differentiate his product, otherwise it would simply be a commodity.

After a short time at home the urge to return to city life became to great to resist, and once again, Mr. Lux left Long Prairie for the Twin Cities. His first employer, The Dominium Group, was developing high-density suburban real estate, which faced major issues surrounding obtaining approval from the community and local government for the rezoning of  land for this use. Suburban homeowners are very protective of their communities, and the amount of space that each homesite has was a reflection of the owners desire for privacy and quiet living. Mr. Lux’s first assignment was in Eagan, MN, where he faced opposition form the mayor as well as landowners surrounding the proposed site. To change the attitudes of the landowners surrounding the site, who were a critical stakeholder in the success of the project, Mr. Lux used a mixture of logic, emotional appeal, and financial acumen to reach out to each of the parties and work with them to develop a compromised plan that met the needs of everyone. In the end this project was approved, and through it, Mr. Lux learned one of the key lessons that has helped him throughout his career. During the lecture, he repeatedly cited the ability to listen to, and connect with people as the most important skill he has, and the main reason why projects fail or succeed.

This lesson is applicable to all industries and Mr. Lux’s insight, through his own personal experience is remarkably similar to the opinion that top researchers have formed regarding the most effective methods of leadership and persuasion. To truly get a party to buy into your plan, it is crucial that they feel their concerns are not only heard, but addressed in a satisfactory manner. This provides a significant feeling of personal worth and ownership in the project, and allows the leader to proceed with the vested support of the stakeholders they are working for. Moving forward in his career Mr. Lux has continually demonstrated this ability, and it has led to remarkable success.

The two biggest projects Mr. Lux has led are the Grant Park Condominiums and the Carlyle Condominiums in downtown Minneapolis. The first of these massive projects, the  Grant Park project, tested Mr. Lux’s negotiation skills, as well as his confidence, as most people seriously doubted the sanity of an individual who wanted to put high end condos in the center of one of the most drug and crime infested neighborhoods in Minneapolis. Originally, the site was zoned for a 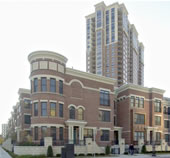 six story building, however after meeting with the leaders of the neighborhood association, Mr. Lux developed a grandiose plan for the renovation of the Elliot Park neighborhood. Working with the city council, the neighborhood association, and his business partners, Mr. Lux created the Grant Park Condominiums, a 27 story, 284 unit building, along with 43 luxury townhouses. Mr. Lux considers this project his favorite to date, not because of the scale of the building, or the final look and feel of the condos, but because of the vast and measurable effect that the project had on the surrounding community. What was once a destitute area just outside of downtown is now a bustling neighborhood that is anchored by the Grant Park Condominiums. Mr. Lux’s other major project, The Carlyle, was built in an already gentrified neighborhood, however the project is still an astounding success in modern development. At 39 stories, it 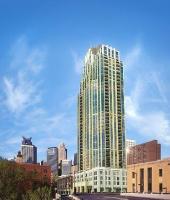 is the tallest residential building in the Twin Cities, and is also widely considered to be the most luxurious. A testament to the attractiveness of the building, 240 of the 255 available units were pre-sold before construction was complete. Only a few stories shorter than the IDS Tower (Minneapolis’s tallest building) the Carlyle is one of the definitive structures that create the Minneapolis skyline. The success of these buildings are certainly enough to place Mr. Lux in the highest echelons of Minnesota developers, however an opportunity in 2010 presented a deal that was too good to refuse.

When asked what valuation Mr. Lux used to gauge the value of Block E, he chuckled and simply said,

“A building that cost $130+ million to develop seven years ago, that is being offered for $14 million, well I’d say that’s the fundamental valuation I considered. However, the real reason we purchased the site, what attracted us most, was the 550 underground parking stalls- that is our business and how we viewed the site. I was also concerned about Block E, the neighborhood (Downtown Hennepin Avenue) is at a tipping point, and if Block E failed it may be enough to have a serious impact on the neighborhood and real estate values downtown.”

Mr. Lux recognized several serious problems with Block E, the foremost being that the original developer did an extremely poor job designing the building to fit the neighborhood. This goes beyond the poor exterior aesthetics to include the retail anchors, the flow of traffic, and the public space available in the structure. So far, it appears that Mr. Lux has very carefully examined the building, and even has designs to recreate the lighting patterns in the building to encourage a warmer and more cosmopolitan feel. The opportunity that Mr. Lux has goes far beyond simply profiting off of an investment, if Alatus is successful in turning Block E into a exciting, beautiful, and useful space, they will go a long way in recreating the image of the Hennepin Avenue business district. As far as a casino is concerned, Mr. Lux was understandably muted in any response, mostly due to the immense passion and controversy that this plan will create, regardless of how carefully it is planned. The only tell that Mr. Lux gave is when asked about the casino, he hesitated, smiled, and said, “we are considering every idea, and listening to the stakeholders that matter to this project.” Although this doesn’t incite anything, the lack of an outright denial, or even an answer about the unfeasibility of such an undertaking hints at the idea that this may be one of the more serious considerations for the space.

Mr. Lux spoke about seizing opportunity and with the rock bottom price of Block E, coupled with the heightened foot traffic in the area (due to Target Field), and the states dire need to generate tax revenue (a casino would likely bring in millions more to the state than any other use of the space) may just provide the chance to, once again, dramatically alter the ethos of downtown Minneapolis. When speaking about Block E Mr. Lux repeated his mantra, to always listen before speaking (or acting), and has lived it by seeking out the views of local businesses, residents, his investors, and the city. Whether a casino actually comes to Block E is certainly unknown at this point, and whatever the future holds every stakeholder involved should feel relief that a developer like Mr. Lux is leading the plan to reenergize Block E, and the downtown district of Minneapolis.

Check back for updates on the next speaker in the Executive Insight Series, or visit the UST MSRE website for more information.

Lease vs. Own: Deciding Which is Right for Your Business