Block E: A Deal Alatus Could Not Refuse

The short history of the building currently occupying the 600 block of Hennepin, know commonly as Block E,  in downtown Minneapolis is a staggeringly accurate metaphor paralleling the last decade of the greater real estate market. According to Minneapolis St. Paul Business Journal, the original cost of developing the site in 2001 (less the $36.25 million spent on the Graves Hotel which did not change ownership) was $105.75 million. When Alatus Development purchased the development in July, 2010 they paid a paltry $14 million, or roughly 13.23% of the original price. At the risk free rate of return (based on the 10 year T-bill which average 4.42% over the period) the investment in Block E would be worth $162.973 million, resulting in a savings of $148.973 million for Alatus in todays value. This investment appears to be a no brainer, but it is not without risk. Since opening, Block E has lost most of the anchor businesses that originally signed leases in the space including: Borders Books, Game Works, The Hard Rock Cafe, Applebees, and Hooters. The space which Game Works and Borders occupied is still vacant, presenting Alatus and Bob Lux, the lead developer on the project, with significant challenges in their attempt to turn the site into a successful retail operation. That said, the final price tag for the site was too attractive to pass on.

One significant factor that helped persuade Mr. Lux to move forward with the deal is the 550 heated underground parking spaces beneath Block E, at $25,455 per spot is inline with other parking structures around the city. Looking at the deal from this perspective, Alatus paid market rate for the parking, and got a deal sweetener that is quite impressive, approximately 213,000 sq/ft of retail space. Pricing it the other way, at $66 sq/ft, the retail space was purchased at a price that is almost inconceivable given Block E’s location at the heart of the downtown district and within walking distance of Target Field, The Target Center, and many of Minneapolis’s theaters and restaurants. Despite the obvious advantages in location, the previous owners at Block E have had serious difficulty maintaining profitable levels of business. Trying to figure out what to do with this space will certainly keep Mr. Lux up at night, until a solution that provides long term tenants can be derived. 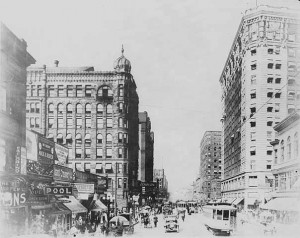 Block E has a rich history as one of the epicenters of Minneapolis. as early as the 1850’s businesses, theaters, and restaurants peppered the area and served as a gathering place for the community. Moving into the 2oth century, Block E developed a lesser reputation as a place for drinking, pornography, and gambling, a stigma that lasted until the 1990’s. The development of the new indoor mall was the first major redevelopment of the area and attempt to increase the use of the area. The location of Block E is extremely attractive, located one block from the Target center and the new Target Field, which drew over 3M fans in its inaugural season. Moving forward, Mr. Lux and Alatus have tremendous opportunity, and formidable challenge in creating attractive space for businesses and commerce. Since the acquisition was made, several news stories have reported different theories on Alatus’s planned use of Block E, with one in particular generating a lot of buzz and controversy.

Back to The Future? |

The story that has captured the attention of many, is a rumor that Mr. Lux is actively looking into the feasibility of turning Block E into a high end casino, more like the Bellagio than the less aesthetic casino’s operated by the National Indian Gaming Commission (NIGC) which surround the great metropolitan area. The story was reported in the Minneapolis Star Tribune on February 23rd and has immediately stirred debate among everyone in the area. The article opens with the following,

“Block E’s new owner is looking for a little Las Vegas magic to cure what ails the retail complex in downtown Minneapolis. Developer Bob Lux has quietly been making rounds to top politicians, including the governor’s office and Minneapolis Mayor R.T. Rybak, to drum up support for a luxury casino in Block E, the struggling mall he bought last year. Lux won’t discuss the plans, but several people have confirmed that he is shopping the gaming idea around. Ted Mondale, new chair of the Metropolitan Sports Facilities Commission, which wants a new Vikings stadium, said Lux discussed the plan with him in a private meeting about two weeks ago. Lux showed him drawings of a casino and spoke of targeting a young, upscale crowd.

“I’ve seen it, and it looks fleshed out and makes sense,” said Mondale. “He seemed pretty committed.” Lux’s company, Minneapolis-based Alatus LLC, issued a statement Tuesday saying that the developers have been vetting all manner of ideas for Block E, which is adjacent to the new Twins ballpark and Target Center.” — From the Star Tribune

However this plan is not without significant challenges, first and foremost is the longstanding monopoly on gambling that the NIGC has enjoyed in Minnesota. While Mr. Lux and Alatus are not commenting on any details of the plan, it goes without saying that they will need to work out a deal that satisfies these powerful interests and meets legal and populist requirements for the project to move forward. Currently, there is a law that prohibits the operation of a casino in the state of Minnesota, unless located on Native American tribal land (click to view compact 3.9221 authorizing gaming). Therefore, to move forward with this plan Alatus will have to lobby for an amendment to the state constitution, or a repeal of the current law. Despite this seemingly enormous hurdle, there is growing support for alternative revenue streams. A casino in downtown Minneapolis would certainly create a massive inflow of tax receipts for the state, which is currently facing tremendous budget pressure. Regardless of the lack of details, speculation is rampant about this proposal, and Mr. Lux’s visit to the University of St. Thomas on Tuesday will surely be a fascinating presentation and discussion. Turning a profit on this investment may require a great amount of work and frustration for those involved, but in the the deal Mr. Lux and Alatus made for Block E was quite simply…

To hear Mr. Lux’s opinion and plan for the development of Block E please join us on Tuesday, February 5th at 5:45pm. For details please visit the MSRE events webpage