From the Developers Perspective: Arbor Lakes in Maple Grove 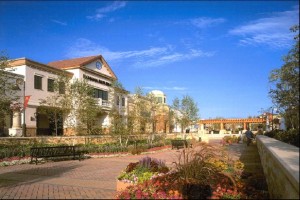 Tim Murnane, president of Opus Holdings, presented to a packed room of current UST students and real estate professionals for the recent Real Estate Executive Insight Series.  In addition to talking about the current economic environment, what he sees for the next few years, and the development of the Best Buy Corporate Campus and Excelsior Crossing, Tim gave the audience an inside look at the work Opus did with the City of Maple Grove in creating an executing the master development plan for a downtown-like retail atmosphere.

In 1995, the north side of 694 near the 694/494 interchange consisted of 2000 acres of gravel.  Today, the area includes the Maple Grove Main Street, a lifestyle center, and a power center which make up the largest cluster of retail in the Twin Cities after the Mall of America.  Unlike the enclosed regional mall concept, Maple Grove needed a city center.  City officials wanted a space that could be central to their growing community and provide amenities to those working and living in the area.  While it’s impossible to recreate an exact replica of St. Paul’s Grand Avenue or Edina’s 50th and France because these areas have been built up over many years, Opus and KKE Architects began with a plan to create a main street retail district that leads up to the Maple Grove City Hall.

Bringing big box retailers to this area created a challenge to the main street store front concept.  The big boxes couldn’t fit into the small building architecture style of a main street, but are desired by many of the consumers Maple Grove was looking to attract to this area.  To meet this challenge, each store was designed to have two main entrance doors; one that faced the main street and one that faced the parking lots and big box retailers which were situated to either side of the main street.  The big box retailers had large parking lots that were also utilized by those shopping in the smaller main street shops.  A second challenge that Opus and KKE Architects faced was the desire of city officials to include office space on the 2nd story of the main street retail.  There was not, however, enough demand for the amount of office space that would be created if all of the main street retail had a second story.  Rather than building out office space, store fronts were designed to all appear to be two stories, but not all of the buildings actually have office space.  This strategy met the needs of the city but also met the demand for the space.  Tim reminded the audience, “If you build something that you can’t lease, you will fail”.

Phase two included Minnesota’s first lifestyle center, Shoppes at Arbor Lakes, which was developed just south of Main Street.  A lifestyle center is defined as an open air, mixed-use commercial development that combined retail and restaurants with amenities that cater to an upscale consumer.  Today, tenants in the Shoppes are Arbor Lakes include national chains such as Pottery Barn, Williams-Sonoma, Banana Republic, and Anthropologie along with restaurants such as P.F. Changs.  Upscale local boutiques are also in the Shoppes including Hot Mama, GoodThings, and North Star Home Fitness.  Store fronts face a common court in the Shoppes at Arbor Lakes creating space for the community to gather for events like the lighting of the Christmas tree and other community celebrations.  Architectural and landscaping detail was added to the Shoppes to add interest and set the area apart and give it an upscale feel.  The architecture and streetscape design is similar to the main street area helping the area to have a consistent look and feel.

The third phase of this project added other big box retailers that were not represented in the main street area into a hybrid power center concept.  This area has about 850,000 square feet of retail and is approximately the same amount of retail space as Ridgedale Mall.  The Fountains at Arbor Lakes was developed to bring a similar look and feel to the area as had already been created through the Main Street and Shoppes at Arbor Lakes development.  They did not want to simply build for big box retailers.  Instead, a duplicate of the phase one main street was created to lead into this power center.   Today, the Fountains at Arbor Lakes includes Lowe’s, Costco, Countryard by Marriott, Dave and Busters’s and a Holiday Inn and Suites as main anchors, REI, Dick’s Sporting Goods, DSW, and Marshalls as junior anchors along with numerous small retail and professional services.  Year round landscaping surrounds the site as well as pedestrian friendly walk-ways, ample parking and a transit station were included in this project to make shopping a pleasant experience for consumers.

These three phases of retail development were completed between 1995 and 2004 and have significantly changed the way that the City of Maple Grove has grown in population and attracted the attention of both large and small retailers.  Through the careful planning and development of this area with careful attention to the architectural detail and the look and feel of the store fronts, along with planning of demand for this space, Opus created a successful development.  KSTP News recently reported that the Shoppes are Arbor Lakes just added three stores and are gaining three more after the first of the year.

What are the most important lessons that you have learned from this look into a project from the developer’s perspective?

Looking for an example of how architecture and building materials make a big difference in new development?