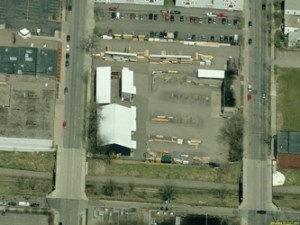 The University of St Thomas will be hosting the 2010 NAIOP University Challenge real estate competition.  Each year a team of undergraduate real estate students from UST compete with students from the University of Wisconsin, the University of Minnesota, St Cloud State University, and the University of Northern Iowa in a real estate development competition.  The student teams develop a project proposal for the development of an actual commercial site.  The “challenge” is to act as a development consultant to determine what the highest and best use is for the site.  This year’s site is in south Minneapolis adjacent to the Midtown Greenway between Freemont and Colfax Avenues, commonly referred to as the Bennett Lumber site (see image above).  The 5.7 acre site is widely considered to be one of the most economically viable sites in the Twin Cities.  Each team’s proposal and plans are presented to a panel of judges comprised of commercial real estate executives who will determine the winner.  This year’s competition will be held Thursday April 22nd at 3:00 at the Thornton Auditorium in Terrance Murphy Hall on the Minneapolis campus of the University of St Thomas.

From a 3-person development and construction company to a full service commercial real estate firm today: Hear from Dennis Doyle, co-founder and chairman of Welsh at UST on May 3.