Lindsey Buhrmann, the author of this post, is a student in the Evening UST MBA. 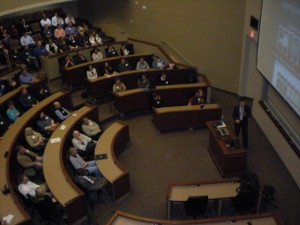 “I am convinced everybody has at least one business in them,” Paul Douglas told several hundred Opus College of Business graduate business students and alumni Friday night. His presentation, “Weathering the Storm: Surviving the Internet Age,” was part of Master’s Pub, a social and educational series that brings together St. Thomas MBA students and alumni every few months to learn about successes in business. Douglas, a meteorologist turned entrepreneur who has started, built and sold several companies advised those in attendance to “take what you love and see how you can turn that into a company.”

While Douglas discussed how the Internet is changing how news, information and advertising is disseminated and consumed (and has created amazing business opportunities), he offered some advice to those looking to start their own businesses: END_OF_DOCUMENT_TOKEN_TO_BE_REPLACED 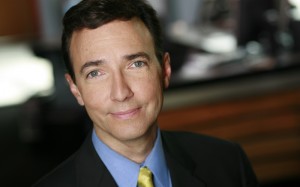 My goal is to share my love of weather and entrepreneurial zeal with organizations and corporations, showing how I turned my passion for meteorology into a string of successful, satisfying businesses.  Weather is an apt metaphor for life – and business. Is your company ready for the Internet Storm? How can you encourage entrepreneurial-thinking within an existing business, literally reinvent your business before would-be competitors do it for you? The only constant, the only thing that can be predicted with 100% accuracy: change is coming. Are you ready?

END_OF_DOCUMENT_TOKEN_TO_BE_REPLACED

A sign marking the Opus College of Business is buried in snow on the Minneapolis Campus of the University of St. Thomas

As we are digging out from what I am attempting to coin “Blizzaster 2010” (in response to the East Coast’s “Snowmageddon”/”Snowpocalypse”…it looks like some people thought of it before us) I thought it would be interesting to consider the economic impact of winter weather.

What seems to be the bigger story of the weekend is the collapse of the Metrodome which, according the the Star Tribune, “ultimately could cost the Vikings millions in lost revenue. An estimated 64,000 ticket holders were expected at Sunday’s game. With season ticket holders paying $30 to $150 a ticket and more money at the concession stand, potential losses could be high.”

“I don’t see this as being cataclysmic,” David Brennan, co-director of the Institute for Retail at the University of St. Thomas told the Star Tribune. “If this was next weekend, it would be a serious, serious blow to retailers.”

More generally, there were quite a few stories about economic factors during the previous Snowmageddon.

Experts say storms are ultimately a net negative for taxpayers, who foot the bill for snow cleanup and the lost productivity of thousands of employees.

But some businesses and retailers are cheering the snowstorms for helping their bottom lines. Obvious booming businesses salt and deicing suppliers. Grocery store chains, hardware stores, and plow owners are having an economic boom while the rest of the country struggles.