After recently attending an executive coaching session in which our second-year full-time MBA students were asked to create a value chart in order of priority for family, work, community and self, the emphasis placed on “values” got me thinking.  While a large proportion of the current professional population has been affected in some way by the arduous job market, how important are values to job seekers?

At a MBA Career Services and Employers Alliance student-lead panel, full-time MBA students  from St. Thomas and the U of M cited various items they consider prior to accepting a job offer.  Of those, professional advancement, opportunity to learn and be challenged as well as sharing the same values rated much higher than a competitive salary. There are a few things any job seeker should think about before accepting a position (or even applying for one). END_OF_DOCUMENT_TOKEN_TO_BE_REPLACED

I’ve gotten to talk with some interesting people but Doug Dayton was one of my favorites. In part because he built two of my retail favorites; Target and Southdale. He was also good to work with while putting together information used to make this video  for the MN Real Estate Hall of Fame. Sad to hear this news of his passing this weekend.

Via Bring Me The News: The Strib’s Neal St. Anthony notes that Douglas Dayton was the youngest of five Dayton brothers who took over their father’s department store in the 1940s and built it into publicly held Dayton Hudson Corp, one of the nation’s largest regional department store chains.

This video, made for UST’s Shenehon Center Real Estate Hall of Fame, has a nice history of the Dayton brothers, as told by Douglas Dayton:

From the Dayton Brother’s Hall of Fame induction: END_OF_DOCUMENT_TOKEN_TO_BE_REPLACED

What do the best corporate blogs do well? 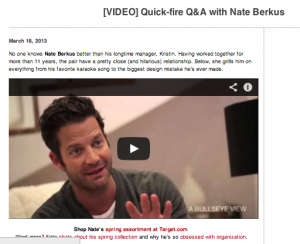 Earlier this week, friend, colleague and fellow blogger Aaron Pearson asked me to speak to his class at the University of St. Thomas in Minneapolis. The topic? Corporate blogging. Something I know a thing or two about based on my personal experiences with this blog and the lessons I’ve put to good use for my clients.

I actually titled my presentation “Is corporate blogging dead?” I hope we all know the answer to that question. And yeah, I was having a little fun with the title. But, the fact remains that 28 percent of Fortune 500 companies have a public blog. Not a bad number. Especially considering we’re talking about the biggest of the big. What about the thousands of other blogs from midsized and small businesses out there? No doubt, those numbers are fairly large.

So, corporate blogging is NOT dead. Who’s doing it well? END_OF_DOCUMENT_TOKEN_TO_BE_REPLACED 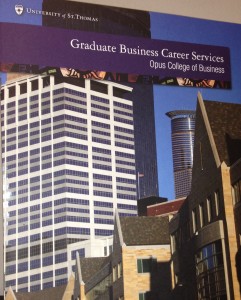 As spring creeps slowly into Minnesota, the graduating class of 2013 is looking ahead to limitless opportunities and the list of leading organizations that turn to St. Thomas as a resource for top talent continues to grow. Minneapolis and St. Paul house 12 Fortune 500 companies and Minnesota is home to almost 20. As these leading organizations seek out top talent, the University of St. Thomas continues to be a great source for recruiting.

Local employers such as Cummins, Ecolab, U.S. Bank, Thrivent Financial for Lutherans and Target all have completed on campus recruiting sessions or interviews this year.  These sessions provided summer internships and full time positions, including roles in change management, marketing, product development and finance. END_OF_DOCUMENT_TOKEN_TO_BE_REPLACED 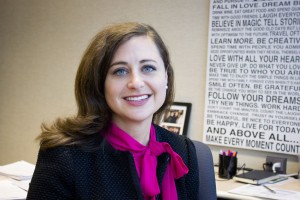 For someone whose interests draw from various fields, the key to choosing a satisfying career involves finding a through-line that connects them all. For Beth McGuire ’07 M.B.C. the recurring theme of communication paved the way to her enrollment in the Opus College of Business’ MBC program and an evolving career at Target.

McGuire’s career in communication began with an internship at Campbell Mithun – a position McGuire landed with no prior experience in the advertising and marketing field. Her undergraduate experience at Mount Holyoke College had merged a diverse set of disciplines, including a major in politics, a minor in music, a position as editor for the school newspaper and an internship with the Minnesota Journal of Law and Politics. McGuire soon came to realize that communication was the common thread running through her many passions. The advertising internship marked the beginning of a more strategic approach to her career goals. “Very quickly, it identified a need for me just to get to parity with my peers in terms of that marketing (and) communications background,” McGuire said. END_OF_DOCUMENT_TOKEN_TO_BE_REPLACED 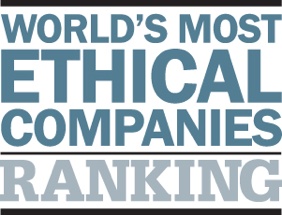 So, where are the UST business alumni? Here’s our count from this year’s list: END_OF_DOCUMENT_TOKEN_TO_BE_REPLACED

Consider Shadowing Someone in Your Career Exploration

Many UST MBA candidates are embarking on engaging experience today.  The Graduate Business Career Services Department organized Shadow Day experiences with 40 professionals from General Mills, Target, UnitedHealth Group and many other local organizations.  The Job Shadow experience provides MBA students an opportunity to interact as well as see the world of a leading professional.

This experience provides ample opportunity to network, gain insight as well as hands on experience in a professional setting.  Although the scheduling and matching has already been completed, much more leg work is still required by the students.  If you are taking part in an experience like this, here are a few suggestions and questions to prepare to fully engage the “Shadower” as well as the “Shadowee.” END_OF_DOCUMENT_TOKEN_TO_BE_REPLACED

Can JCP’s Ron Johnson Bring the Target and Apple Magic to the Struggling Retailer?

Ron Johnson, CEO of JCP (J.C. Penney’s for everyone who has not adopted the company’s new branding) has an impressive resume of retail successes. He is recognized for bringing high design products such as the Michael Graves lines into Target Stores and most notably, launched the Apple store concept and Genius Bars throughout the country. Now that he has taken the reigns of JCP, he is working to reenergize the company that, quite simply, was in need of a new strategy. Stephanie Clifford of the New York Times wrote:

“While many shoppers go to Walmart for price, Target for cheap style, high-end stores for luxury treats and the Web for ease, stores like J. C. Penney have faded into the background.”

Of the new JCP strategy, Dave Brennan, professor of marketing at the University of St. Thomas, Opus College of Business stated that  Johnson is working to reposition to an upscale department store more comparable to Macy’s. The J.C. Penney strategy had previously been comparable to Kohl’s. Their primary consumer is aging and the business model is tired. In addition, they are working to reduce the pitfalls that come along with promotional pricing. Prices had traditionally been inflated in order to accomodate the price decreases during sales. Rather than the unpredictable sale pricing, JCP has adopted an everyday stable pricing strategy with limited sales and markdowns on a consistent schedule. Consumers will know what to expect for pricing on the merchandise rather than taking the risk of going in when their favorite items are not on sale. This also creates staffing efficiencies for the company as they do not need as many staff in order to facilitate pricing change.

By dissecting areas of the new retail strategy, it becomes clear that Johnson has brought elements of his past experience into JCP. From the store layout, branding and leadership team, the new JCP has a foundation for a successful rebirth with concepts pulled from both Apple and Target’s success.

Johnson clearly has a good understanding of the target demographic for both Target and Apple stores. This is not the same demographic as the J.C. Penney of old. These changes are positioning the company to be more closely aligned with department stores like Macy’s in terms of merchandising and target market. Johnson is trying to attract new customers to JCP, specifically, skewing to a younger crowd who are brand and trend conscious but also on a budget. This is starting to sound a lot like Target. END_OF_DOCUMENT_TOKEN_TO_BE_REPLACED

Ethics is More than Compliance

When asked, at the February 9 Intersections in Ethics event, if she was the conscience of Best Buy, Kathleen Edmond, the company’s chief ethics officer, smiled and replied “I’m the air traffic controller.”

More than 250 guests registered for this second event in the Intersections series, drawn not only by the topic, but by the participants: Edmond was joined by Dr. Kenneth Goodpaster, the Opus College of Business Endowed Chair in Ethics. In a wide-ranging conversation moderated by Christopher Michaelson, assistant professor in the college’s Ethics and Business Law Department, Edmond and Goodpaster explored the impact a clear-eyed approach to business ethics can have on employee morale as well as the bottom line. END_OF_DOCUMENT_TOKEN_TO_BE_REPLACED

One Mark of the Opus College of Business’ ROI

This fall marks the start of my fifth year as a part of the St. Thomas community. I can honestly say that of all of the projects and programs I’ve been a part of during my tenure, the Promises Kept Tour has been one of the most fun and engaging. This was made so primarily by our outstanding alumni – the hundreds who attended the events and especially those who hosted our team at the various locations we visited.

The Promises Kept Tour was a celebration of the Opus College of Business’ recent AACSB accreditation, which has put the UST graduate business programs on the global map by joining the 5% of business schools worldwide with this distinction. The tour was also a time for sharing the other developments at the university, including new buildings, a dramatic increase in the number of tenure track faculty and a sharpened focus on earning international recognition for our programs.