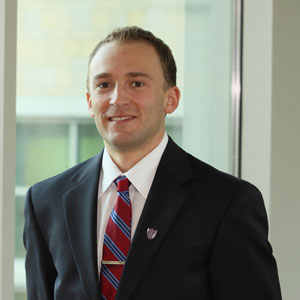 Instead of focusing on making his voice heard, Max Shapiro already aspires to something loftier: to be the voice for those that go unheard. Shapiro is in his second year of St. Thomas’ dual degree JD/MBA program, a joint venture between the School of Law and Opus College of Business that will ultimately supply him with degrees in both law and business.

While working toward his bachelor’s degree in leadership and management at St. Thomas, Shapiro felt torn between law school and business school. An information session he attended his junior year for the School of Law’s newly-launched Tommie Law Early Admission Program, an opportunity that exempts students from taking the LSAT and compresses a would-be five years of study into four, ended up winning him over. He later decided to add the MBA to make room for more opportunity. Shapiro has already completed the exclusively-law first year of the program and is working through the exclusively-business second year; years three and four are hybrids of both disciplines, meaning Shapiro will be switching between the two schools next year.