Is The New Pope the CEO of the Catholic Church? 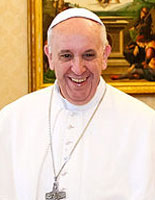 Unless you’ve been hiding under a rock for the last month, you know that a new pope was selected. As a business school at a Catholic University, we wondered how Pope Francis’ challenges as head of the Catholic Church relate to the challenges of any new CEO. “One of the things the new pope will have to deal with is a classic business mess — a multi-billion dollar conglomerate that has stumbled and is losing money and relevance,” noted Planet Money. We asked some of our faculty to weigh in and got some surprising answers, and discovered that UST has a direct influence on what the Church says about the “Vocation of the Business Leader.”

Professor Robert G. Kennedy from the Ethics and Business Law Department noted that while people are still trying to figure out the pope’s new priorities, he is not the CEO of the church, and the Vatican is not the headquarters of a global corporation.

“The pope is leader of the college of bishops,” said Kennedy. “And the church is more like a confederation of thousands of local organizations.” There are thousands of bishops around the world who make decisions about their individual dioceses, without running everything through the Vatican. 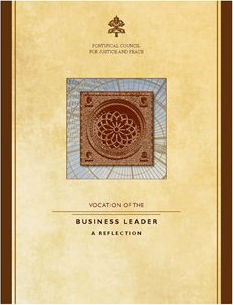 Kennedy noted that UST professor Michael Naughton, Moss Chair in Catholic Social Thought and director of the John A. Ryan Institute for Catholic Social Thought was the principal editor of a document, entitled Vocation of the Business Leader, issued last March by the Vatican’s Pontifical Council for Justice and Peace. Several other Opus College of Business faculty were on the drafting committee.

This publication forms the base of the church’s opinion about business. “In this document, the church, drawing from its rich social tradition, all but declared that ‘God loves businesses’ and offered concrete ways to bridge principle and practice,” explained Naughton in America Magazine.

We asked Naughton to share a few thoughts: END_OF_DOCUMENT_TOKEN_TO_BE_REPLACED

As the new year starts off, we’re looking back at the ten most popular posts on Opus Magnum from 2012. Today we begin with #10, which focused on the “Vocation of the Business Leader” and came from UST’s John A. Ryan Institute, which explores the relationship between the Catholic social tradition and business theory and practice by fostering a deeper integration of faith and work.

Cardinal Peter Turkson, president of the Pontifical Council for Justice and Peace, presented Vocation of the Business Leader: A Reflection, at the XXIV UNIAPAC World Congress in Lyon, France.

Cardinal Turkson explained, “The Vocation of the Business Leader, fulfils its purpose of being a helpful guide to business leaders seeking to grow in the virtue of charity as befits their vocation… The book covers three constitutive, interconnected moments of the process of discernment: seeing, judging and acting.”

Six Practical Principles for Business from the Catholic Social Tradition

The University of St. Thomas will be closed for the Easter holiday April 6 to 9. This post comes from UST’s John A. Ryan Institute, which explores the relationship between the Catholic social tradition and business theory and practice by fostering a deeper integration of faith and work. Opus Magnum will return with new posts on April 10. 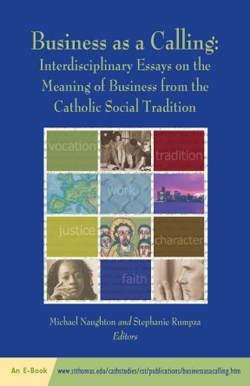 The principles of respect for human dignity and pursuit of the common good are the foundations of the Church’s social teaching. Joined with the six practical principles of business, they can offer more specific guidance on the three broad business objectives.

1. Businesses that produce goods which are truly good and services which truly serve contribute to the common good.
2. Businesses maintain solidarity with the poor by being alert for opportunities to serve otherwise deprived and underserved populations and people in need. END_OF_DOCUMENT_TOKEN_TO_BE_REPLACED