Outside consultant: 4 tips for working with a retailer

UST Faculty regularly answer questions in the Star Tribune’s Ask The Consultant column. Here’s the most recent question. Ask your own question.

Board game inventors looking for a break
I created an award-winning board game a few years ago that teaches what it’s like to be a lawyer and run a small business. Anyone who plays the game says this should be in Barnes & Noble. How do you get a sit-down meeting with a large company? Sending marketing materials does not work. These companies are inundated with products. How do you separate yourself from the pack on a limited budget?

UST Faculty regularly answer questions in the Star Tribune‘s Ask The Consultant column. Here’s a round-up of a few recent questions. Ask your own question.

On March 1, teams from the full-time MBA program at the University of St. Thomas’ Opus College of Business competed in the fifth annual CEBC Ethics Case Competition. Hosted by CEBC, UST Opus College of Business, UnitedHealth Group and St. Jude Medical, teams explored the topic of “Video Gaming: Economic, Legal and Ethical Considerations” from a business, legal and ethical framework.

Does gender and racial identity no longer matter in business? 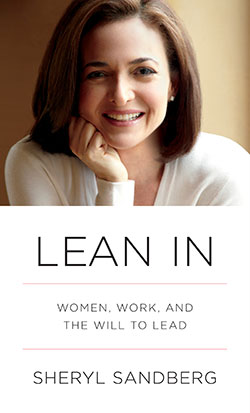 The presence of female and minority leaders in America today has some people thinking that gender and racial/ethnic identity no longer matter in business and society today. In fact, these issues have just become muted and difficult to talk about due to political correctness and fear. Who benefits from this? Not most Americans of color, not most white Americans, not men, not women, and certainly not children.

If you want an example of how powerful gender norms still are, and how our society lashes out when people violate them in the business world, check out this post on Salon about the negative reaction to the new book by Sheryl Sandberg, Facebook’s chief operating officer, “Lean In: Women, Work and the Will to Lead,” out today. END_OF_DOCUMENT_TOKEN_TO_BE_REPLACED

Nominations are due today for the Opus College of Business Julie Hays Teaching Award.

“UST is a teaching university where faculty research is also valued.  Julie Hays exemplified the values we share as scholar-teachers,” says Dean Christopher Puto. Dr. Hays was a member of St. Thomas’ Decision Sciences Department (now Operations and Supply Chain Management) and was vice chair of the Opus College of Business faculty. She died suddenly on November 11, 2007. “This award is designed to recognize the high caliber of teaching embodied in our commitment to students.”

Nominees for the Julie Hays Teaching Award should demonstrate exceptional dedication as well as extraordinary skills and success at enhancing students’ ability to think critically, act wisely and advance the common good by educating students and working professionals to become effective, ethical business leaders and to be constructive contributors to society. END_OF_DOCUMENT_TOKEN_TO_BE_REPLACED 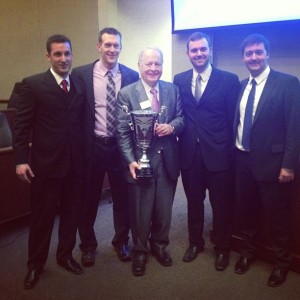 A team of MBA students from the Opus College of Business bested competing teams from the U of M Carlson School and U of Iowa Tippie School in the 2013 ACG Cup case study competition last week. The team that took first place and an award of $4,000 included first-year MBA students Ryan Nelson, Jeff Hawkes, Adam Lawrence and Anthony Anderson (pictured at right with Dean Puto).

The ACG Cup is a designed to give students from leading MBA programs across the country real world experience and invaluable insights into mergers and acquisitions, investment banking, financial advisory and private equity. Each case study provides students with a unique opportunity to present valuation, capital markets and M&A strategic advice to a panel of seasoned M&A professionals from within the ACG community. The competition is carried out through a series of intra-school and  regional competitions, with regional winners awarded the prestigious ACG Cup title and cash awards. END_OF_DOCUMENT_TOKEN_TO_BE_REPLACED

Should Wall Street be afraid of the new rules established by the Dodd-Frank Act? 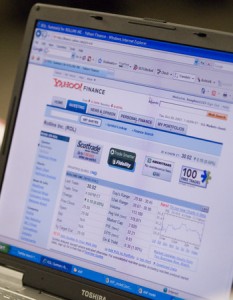 The Dodd-Frank Act appears to be the last chapter in the debate on hedge-fund adviser registration and disclosure. Title IV of the Dodd-Frank Act authorized the SEC to register hedge-fund managers and demand enhanced disclosure. The SEC now requires the disclosure of financing information, risk metrics, strategies and products used by hedge-fund managers, performance and changes in performance, positions held by the investment adviser, percentage counterparties and credit exposure, assets traded using algorithms, and the percentage of equity and debt, among others.

About the Author: Wulf Kaal is an associate professor at the University of St. Thomas School of Law. Before entering the academy, he graduated with a Ph.D., J.D., M.B.A. and LL.M. and worked for Cravath, Swaine & Moore, L.L.P., in New York City and Goldman Sachs in London. Kaal specializes in hedge-fund regulation, international finance, European law and corporate law securities regulation. He has published in leading European law and finance journals and leading American law reviews.

UST Faculty regulary answer questions in the Star Tribune‘s Ask The Consultant column. Here’s a round-up of a few recent questions. Ask your own question.

How to improve visibility on the Internet?
Being in the wig business since 1969, we have seen many changes in our business. We find the Internet the most challenging. To promote our website (www.jacquelynwigs.com) we have been doing search engine optimization and pay-per-click. We have tried in-house and freelance companies to do the work for us but we still feel we are not getting enough qualified leads. Any suggestions?

Read the answer from Mike Porter, director of the Master of Business Communication Program

How do I manage family members who work for me? END_OF_DOCUMENT_TOKEN_TO_BE_REPLACED 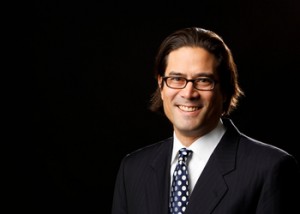 As the new year starts off, we’re counting down the ten most popular posts on Opus Magnum from 2012. Today we’re at #5, a fitting post for the new year, too if you’re sitting there in your office and wondering where your job/career may take you in 2013. We asked Christopher Michaelson, Ph.D., “What is meaningful work?”

His most surprising finding?

After several years of talking with people about meaningful work, it should no longer surprise me to meet people for whom meaningful work is not seemingly a high priority. However, it does continue to surprise me. Usually what I find is that there are competing pressures preventing them from seeking meaningful work. Those pressures will continue to hold sway if we don’t, as a society and species, continue to examine and refine our values that determine why we do what we do.

What exactly is a social entrepreneur?

By Dr. Mark Spriggs, from the Schulze School of Entrepreneurship newsletter

About 10 years ago, I felt like an NFL player when Dean Puto told me I had been traded from the Marketing Department to the Entrepreneurship Department. My first and most daunting challenge was learning to spell entrepreneurship. Is that “per” or “pre;” “eu” or “ue?” I imagine some of you went through the same transition when you discovered, or were told, that you were a social entrepreneur. You thought you were running a nonprofit. You knew your organization was attempting to solve the problems of poverty, disease and hunger, or provide literacy training or medical care to people, all to help resolve the social inequities we see every day in the world, and someone said “What you are doing is social entrepreneurship” and you had to figure how to spell it, too.