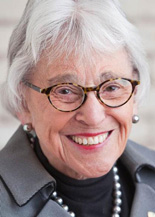 As one of the first female leaders in the Twin Cities real estate community, Helen Brooks paved the way for women in commercial real estate.

When she first embarked on a career in commercial real estate, finding a company that would take a chance on hiring a woman was a challenge. At that time, women simply were not in the industry. Brooks got her feet wet at Premiere Realty when they hired her in 1965. She spent four years at the company before venturing out on her own and founding Brokers’ Exchange in 1969. After working for nine years on many successful deals with clients such as Pizza Hut, White Castle and McDonald’s, Bill Reiling and Fred Lamb of Towle Real Estate offered her a position. Brooks quickly became known industry-wide as “that woman at Towle,” successfully working with many satisfied clients while representing the industry exceptionally well.

The Minnesota Real Estate Hall of Fame has been established to honor, preserve and perpetuate the names and outstanding accomplishments of real estate leaders who have made a significant contribution in real estate and demonstrated care and concern for improving their community as a business leader.

Brooks is only the second woman to be inducted to the Hall of Fame. The other is Emma Rovick, who built Edina Realty to be one of the largest real estate companies in the nation.

Shaun Donovan, U.S. Secretary for Housing and Urban Development will be the keynote speaker at the Hall of Fame event, held in Schulze Hall Auditorium on the Minneapolis campus of the University of St. Thomas.

Donovan’s tenure as HUD Secretary has reflected his commitment to making quality housing possible for every American. Sworn in at a time when the foreclosure crisis had devastated American families, under Secretary Donovan’s leadership HUD has helped stabilize the housing market and worked to keep responsible families in their homes. The agency has instituted reforms that have solidified the Federal Housing Administration’s financial position and protected the taxpayer against risk, while still preserving FHA’s mission of providing responsible access to homeownership.

Regarding a Defense of the Scholarly Life